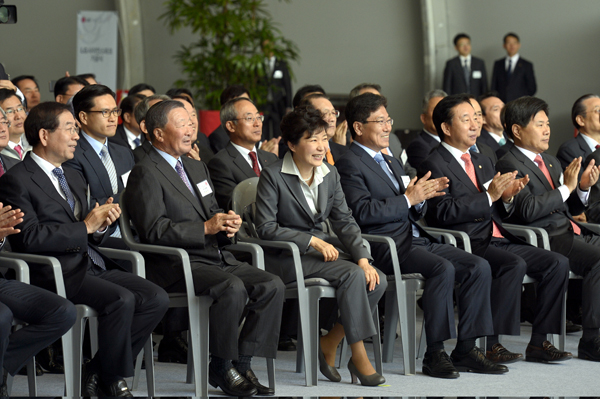 President Park Geun-hye yesterday showed up at a groundbreaking ceremony for a research complex being built by the nation’s fourth-largest conglomerate, LG, showing a new level of support for Big Business in an effort to maintain economic growth.

“LG Science Park, which is having a groundbreaking ceremony today, is a good example of the spirit of challenge that [an enterprise] shows by boldly investing for the future and relentlessly pursuing innovation despite difficult times,” Park said at the ceremony.

As the economy remains in the doldrums, concerns over Korea’s growth potential have risen, she continued. The government is carrying out a three-year economic “innovation plan” to overcome such challenges. But efforts by the government aren’t enough, she noted, and the plan can only gain traction with help from the private sector.

“The worse situation you are in, the bolder the investment you should make to prepare for the post-crisis period,” she said. “Whenever the Korean economy faced trouble, companies transformed crisis into opportunity by making aggressive investments and facing challenges with entrepreneurship.”

The LG Science Park, located on 43 acres of land in the Magok Industrial Complex in southwestern Seoul, will be home to research centers of LG’s 10 affiliates - including LG Electronics, LG Display, LG Chem and LG U+ - so that they can collaborate on developing goods and services. The completion of the research complex is scheduled for December 2020.

Attendees of the event included heads of LG affiliates as well as the minister of trade, industry and energy, Seoul’s mayor and other government officials.

LG Chairman Koo Bon-moo said during the ceremony the conglomerate is poised to spend about 4 trillion won ($3.8 billion) through 2020 on the science park, which will become the nation’s biggest research complex in the fields of electronics, chemicals, telecommunications and energy.

The LG research complex “is forecast to create a combined 90,000 new jobs and 24 trillion won worth of new production annually, and is expected to contribute to creating future growth drivers and realizing a creative economy,” said a Blue House official. “The president’s participation in the groundbreaking ceremony is meant to encourage more large Korean companies to invest further.”

The president has been revving up her pro-business appearances. While she didn’t attend a single event hosted by large companies in her first 19 months in office, she has appeared at three business events over the last month. The first was a launch event for the creative economy innovation center that the Daegu government and Samsung jointly opened on Sept. 15. The second was a similar opening for a project by Daejeon and SK on Oct. 10.

On the celebration of her first year in office in February, Park unveiled a three-year plan to spur innovation in the economy and bolster economic activity through deregulation, with the concrete goals of lifting economic growth to 4 percent annually, increasing the employment rate to 70 percent and raising per capita income to $40,000.