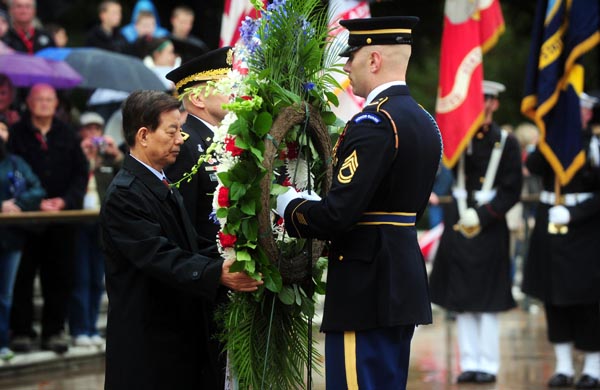 South Korea and the United States have agreed to delay the transfer of U.S. control over Korean troops in wartime from 2015 until Seoul is better able to deter Pyongyang on its own, Seoul officials said yesterday.

The new date of the handover of wartime operational control of South Korean troops will be decided later after evaluating Seoul’s capabilities, defense chiefs of the two countries agreed.

Last year, the Park Geun-hye administration requested that the U.S. handover of wartime operational control, scheduled to take place on Dec. 1, 2015, be delayed. Seoul and Washington have worked on a new schedule since then.

Korean Minister of National Defense Han Min-koo and U.S. Defense Secretary Chuck Hagel were to address the issue at their annual Security Consultative Meeting at the Pentagon on Thursday, Washington time, and make a formal announcement following the talks.

According to Korean officials, a memorandum of understanding to state new terms for the transfer was to be adopted at the meeting. A joint declaration was also expected to be adopted to determine other issues between the two allies.

The United States exercised full control over Korean troops during and after the 1950-53 Korean War, and the South regained peacetime control over its military men and women in 1994. At a 2006 summit, presidents of the two countries agreed that Korea would take over wartime control over the troops. In 2007, the date of transfer was set to April 2012.

At a 2010 summit, presidents of the two countries agreed to delay the transfer to December 2015. Another delay was requested last year by Seoul, and Washington has now accepted it.

This time, however, the two sides did not specify a date for the transfer. They said a new date will be decided later after reassessing the Korean troops’ capabilities and changes in the security environment on and around the Korean Peninsula.

The two countries agreed that three main conditions must be met for Washington to hand over operational control to Seoul, sources said, indicating that the transfer will take place only when the South is ready to counter the North’s threats on its own.

The security climate in the region must be stable enough to accommodate the change, they agreed. The Korean military must be ready to lead the Korea-U.S. combined efforts to defend the country after the transfer, they also said.

The Korean military must also be ready to counter the North’s nuclear and missile threats in the early stages of a local provocation or a full-scale war, according to Korean officials.

While no specific date was agreed upon, the goal for now will be mid-2020, Korean officials said.

South Korea also reaffirmed its commitment to develop the so-called “Kill Chain” and the Korea Air and Missile Defense systems by mid-2020, the key military capabilities for its independent countering of the North’s nuclear and missile threats.

“Although we did not pin down a date, we have a goal,” said a Defense Ministry official. “We plan to establish capabilities to counter nuclear and missile threats of the North by early 2020, but we may experience a delay. So mid-2020 was decided as our goal.”

As South Korea earned about a decade to upgrade its capabilities to independently defend the country from the North’s nuclear and missile threats, Seoul and Washington agreed that they will create a more specific plan for the transfer before next year’s Security Consultative Meeting.

Based on this new timeline, the South’s readiness will be evaluated every year, and a final checkup will take place one to two years before the target date.

Even if the Korean military completes its military upgrade, the transfer can be delayed again if the security climate in the region changes or remains unstable. Speculation, therefore, is high that the U.S. government agreed to the delay taking into consideration the rise of China.

At the security consultation, Seoul and Washington were to agree on the concepts and principles for a comprehensive missile operation to detect, deter, disturb and destruct North Korean missiles carrying nuclear, chemical or biological warheads. The agreement, according to Seoul officials, means that the two countries will reinforce their joint defense capabilities.

“It means Korea will ready its reconnaissance capabilities and upgrade its strike abilities by mid-2020,” said a Defense Ministry official. “The agreement means Korea-U.S. combined capabilities will be strengthened.”

To this end, the two countries made some modifications to the current realignment plan of U.S. Forces Korea.

The 210th Field Artillery Brigade of the U.S. 2nd Infantry Division, whose role is to deter the North’s long-range guns, will remain in its current location in Dongducheon, northern Gyeonggi, until early 2020. The brigade was scheduled to move to Pyeongtaek, south of Seoul, by 2016, but it will move after the South Korean military completes its next-generation artillery unit.

If war breaks out in Korea, Korean troops will be responsible for deterring the North’s artillery during the early stages, and keeping the brigade where it is now until early 2020 is necessary, the official said. The brigade provides fire support for the U.S. 2nd Infantry Division and its assets include the M270 Multiple Launch Rocket System.

Other combat units of the 2nd Infantry Division, located in Dongducheon and Uijeongbu, will move to Pyeongtaek.

The Korea-U.S. Combined Forces Command and the U.S. 8th Army Command will also remain in Yongsan, central Seoul, now that the two sides agreed to the delay of the transfer of wartime operational control. The rest of the American troops located north of the Han River will still move to Pyeongtaek by 2016 as planned.

According to Seoul officials, the remaining troops in Yongsan will continue to occupy about 17 percent of the garrison.

“Of the 600 people working in Yongsan, most of them will move to Pyeongtaek and a minimum number of manpower will stay,” a Defense Ministry official said. “The housing facilities will also be removed to minimize the area occupied by the U.S. troops.”

While the headquarters of the U.S. troops and the 210th Field Artillery Brigade will remain in their current locations, the land development plans for their sites face major disruptions. Seoul and Washington agreed that they will find a reasonable resolution through further consultations on who will pay for the expected financial burdens, but it is destined to become a hot political potato.

The two sides had a protracted tug-of-war on this issue until the defense chiefs sat down, sources said.