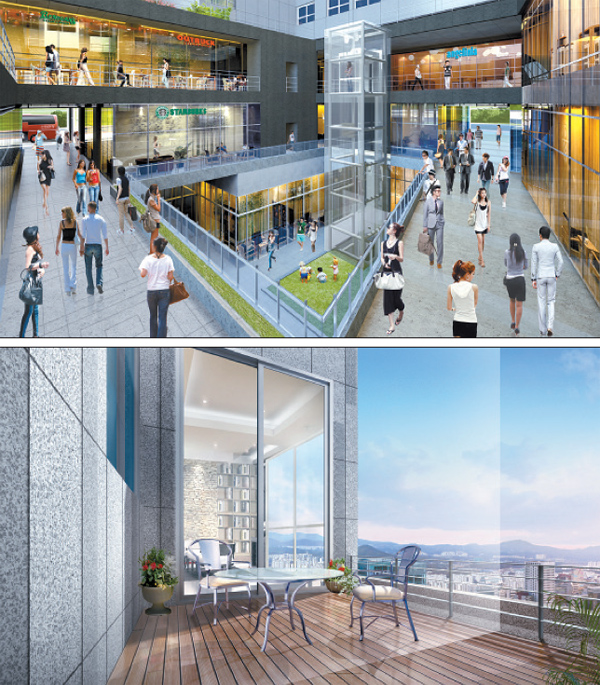 An image of a Hillstate officetel in Magok, southwestern Seoul, includes the living area and outdoor terrace. [JoongAng Ilbo]


With an excess supply of so-called officetel buildings, some are trying to differentiate themselves by providing hotel-like services to attract tenants.

Kim, who lives in an officetel in Magok, western Seoul, has breakfast at a restaurant in the building at 7 a.m. The restaurant serves fruit, bread, coffee and juice.

After half an hour, an employee brings him a clean shirt from the building’s laundry shop.

In Korea, an officetel is a multipurpose building with a mix of residential studio apartments and commercial units.

By the time Kim walks out of the building at about 8:30 a.m., his car is ready in front of the main entrance. The car has also been cleaned, thanks to a service offered by the building.

Kim has never thought about cleaning his studio. Twice a week, housekeepers do all the work.

On weekends, Kim works out at a fitness center in the building, which also houses a sauna.

He doesn’t even need to shop for groceries.

A handful of officetel buildings are getting makeovers from empty, spooky structures to luxurious, full-service buildings. They are increasingly popular among singles who are busy with their careers and lack time for household chores.

“As the average income level rises, quality of life has become more important than before,” says Kwon Dae-jung, a real estate professor at Myongji University. “Those people are pursuing convenience and specialty in their lifestyles.”

Magok Luxnine, which received pre-subscriptions for purchases last month, is one of the newly-built officetels that offers breakfast, parking and laundry services. 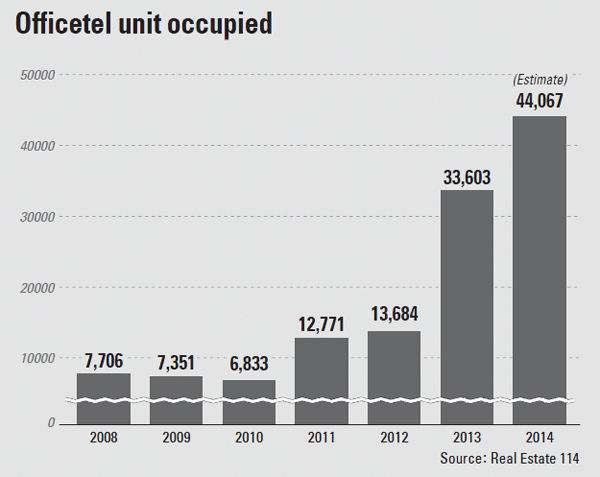 Gwanggyo The Sharp Lake Park Officetel, built by Posco E&C in Gyeonggi, has a club lounge where residents can have breakfast and dinner and enjoy garden parties. Of course, it has a fitness center, an indoor golf complex and a spa.

In Gimcheon, also in the same province, Koaroo Park Dream City will be built and will offer breakfast, laundry and information services, as well as a business center, a book cafe, a fitness center and a rooftop park.

Some officetels collaborate with hotels to improve services.

Guro Digital Hyosung Harrington Tower by SK D&D is under construction with SK D&D and Shilla Stay Guro, a business hotel launched by Hotel Shilla. Residents will have access to restaurants, business rooms and cafes at Shilla Stay Guro at discounted prices.

JSPND plans to build Daegu Marriot Royal Suites, which combines a hotel and an officetel building, in Daegu, North Gyeongsang.

Such hotel services were first introduced to residents of officetels in the mid-2000s, when some high-end apartments in Seoul strategically marketed such services.

But the trend is spreading to officetels for single adults who live in studios.

“There is not much difference in the quality of such buildings themselves,” says Kim Joon-soo, an executive at Posco E&C. “But to meet the needs of those consumers, we must provide high-end services.”

Owners of officetel buildings are swiftly hopping on the bandwagon as the number of such buildings exceeds demand.

“After the supply significantly rose, they are desperate to attract buyers with differentiated services,” says Kim Joo-wook, CEO of Urban Partners. 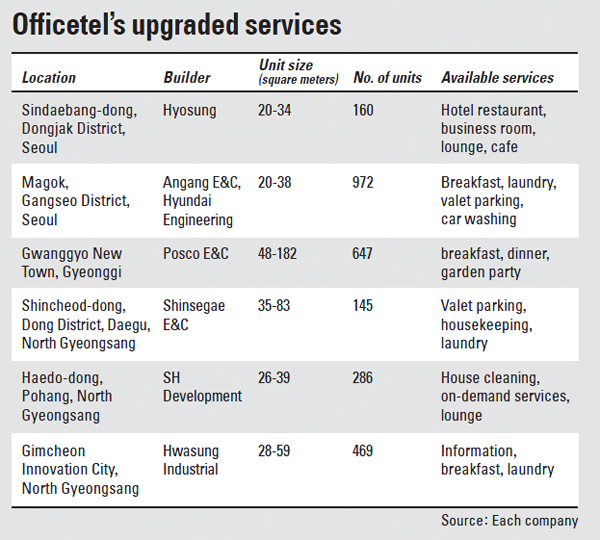 And the reception among the public has been good. The bidding ratio for Magok Luxnine was 12 to one, the most heated competition for officetel units, with buyers showing the most interest in breakfast and laundry services.

Koaroo Park Dream in Gimpo saw a bidding ratio of five to one.

“One-person or two-person households are not used to such chores, so offering such services will make it easier to find tenants,” says Hong Cheol-ki, head of development at Angang E&C.

However, those who are considering moving in should be aware that services such as breakfast and laundry are not free. The fees are marked up about 70 percent from those outside the building.

Because of the community lounge and fitness club, maintenance costs also will be higher than ordinary officetel buildings.

“Those officetels are mostly on monthly contracts, and that could be a big burden on tenants,” says Ko Jong-ok, CEO of Cocoon House.

Other than among top earners, such serviced officetels may not be popular.

“A key factor in their success will be the service rates,” says Park Seung-kuk, CEO of Life Tech.

“Services can help raise profits of owners, but the services are ancillary, so they need to be careful about investing in those buildings,” adds Hong Seok-man, head of the real estate department at Woori Bank.

Because of the new trend, investor interest in officetels as potentially stable sources of income in an environment of low interest rates is on the rise.

Since officetels fall under commercial construction laws, not the residential housing law, buyers are not required to have pre-subscription bank accounts. They can register as renters with the tax authority and later receive refunds for value-added taxes incurred from rents. But if they purchase officetels as residences, the may face a higher tax bill.

Unlike apartments, officetels are usually smaller than areas specified in contracts. The actual area of a studio is 50 percent of what the contract says, while an actual apartment area is 70 percent.

“The actual area is important for calculating rents,” says An Min-seok, a researcher at FR Investment.

When estimating the profitability of rental income, it would be sensible to expect no more than that based on the current market price.

“Some in the market exaggerate the future appreciation of officetels,” says Kwon Kang-soo, an executive at Korea Establishment Realty Agent. “That won’t be true.”

Investors should be meticulous when they want to invest in serviced officetels.