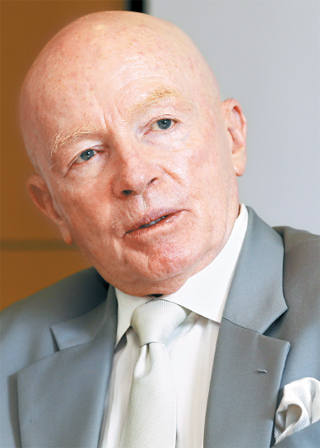 Mark Mobius, executive chairman of Templeton Emerging Markets Group, is confident that medical devices and related businesses will be the next big thing, and speculates Samsung Electronics will advance in the field.

In an exclusive interview with the JoongAng Sunday this month at the company’s office in Singapore, Mobius said he believes the Korean tech conglomerate has some of the expertise required, such as mobile communications and computer chips. Mobius visited Seoul-based Samsung Electronics in August.

The 78-year-old executive, who was one of the investment pioneers in emerging economies in the 1960s, is referred to as the “Midas hand” that moves emerging markets.

Q. You have posted on your blog about the importance of entrepreneurship and commented that Korean parents in most cases want their children to work at state-owned companies or chaebol instead of starting a business. What is your advice to the Korean government?

And what you need to do is recognize failure in cases where someone has gone through failure and turned around and succeeded later. President Park Geun-hye should call out these people [who have overcome failure to be successful] and say, “Look, you’ve done a good job,” and give a reward or something. It has to be shown that it is possible to fail and later succeed.

Give more and more examples of that, and allow people to take chances, learn from mistakes.

It’s already happening. There are actually successful Korean entrepreneurs who left chaebol and succeeded, but not enough of them. We need more like that.

What sort of Korean companies are you interested in?

We have been investing in smaller and medium-size companies, not in the major chaebol companies.

And that’s quite significant, in the sense that we feel these medium small companies provide greater prospects for investors in the long term. The trend in Korea, as you know, is to help grow smaller and medium-size companies. The chaebol have really dominated, but now we’re beginning to get away from that.

You recently visited Samsung Electronics. What did you discuss and what did you get out of it?

They’re moving ahead with a lot of research and development, which of course they have been doing for quite some time. And they are developing a whole new range of products. So we can expect more and more innovation from Samsung going forward.

Probably the most interesting background aspect is the medical license. Medical telepathy is an absolute thing, which can be very exciting for the company.

They never stated this, but I suspect they’re going forward [with medical initiatives] in addition to their three main businesses.

Uncertainty, of course, surrounds the succession in the family as to who’s going to take charge after Chairman Lee [Kun-hee]. And that also raises the question of what the family is going to do about inheritance taxes and the rest of that. And that’s somewhat concerning to an investor.

Did you actively discuss medical devices?

No. We just touched on it, and they said they’re doing some research, but that was all. But I suspect that if you look at their capability, it would be natural for them and become very important.

They’ve got the communications, research and chip expertise. Put all of these things together, and I see medical devices.

You’ve been investing in blue chips such as Samsung, NHN and Hyundai Department Stores. What area do you think has great promise?

I would say medical device companies. Companies involved in anything related to medical devices and medicine, like pharmaceuticals and hospital care. The other area would be consumer products. Why? Globally, as incomes rise, more money will be available for medical care. Across the globe, the population is aging. And when we look at it, advances in automation will have a big impact on medicine. Genetic code analysis is an essential theme for medical care.

Chinese economic growth has been sputtering and there is speculation the country will no longer grow as fast as it once did. However, you seem optimistic. Why?

It’s a natural development to be decelerating from such a high rate of growth. It is something that has already been expected and we should expect more from China moving forward. It shouldn’t be alarming because the size of the economy is large. And then you have to put it in the context of still being one of the fastest-growing markets.

European and North American countries and Japan have growth rates that are much lower.

This year, there has been a lot of excitement surrounding China’s Alibaba. But you seem skeptical. Why?

It mainly has to do with the corporate governance issue. As you know, Chinese law states that foreigners cannot own Internet access. So Alibaba and some other companies have been trying to find ways of getting around that prohibition. That’s quite dangerous, in my view, because the Chinese government one day can say that stock shares [from Alibaba] are not legal and therefore they would have to dispose of them.

Additionally, only two people really control the company, and they can do whatever they want.

So there’s no checks and balances, which is quite dangerous.

That’s the only objection. Otherwise, the business is good, it’s a famous company and they did a perfect job promoting it.

What do you look for when investing in companies?

We first look at what the advantages are, how they are treating their shareholders. Are they capable of maintaining good relationships and management control?

Secondly, we check the balance sheet. Do they owe money? Is there a chance of bankruptcy?

The third thing we look at is earnings growth. What are the prospects for the company and the industry moving forward?

Then we look at the valuation. Is this company cheap? Is it relatively cheaper than its competitors?

How would you evaluate Abenomics? Do you think it has succeeded?

It’s not succeeding yet. You probably have to give it time. It’s not really moving ahead because of the tax system. You see, if you want to form an industry, you have to give it room to move. Shinzo Abe’s consumption tax, in particular, is not good. If he really wants growth, he has to cut taxes. You have to allow room to grow. On Europe, the problem with the European Union is, again, restrictions. Registration, regulations and taxation put a damper on economic growth. And it seems the European Union keeps imposing new regulations. And, of course, the countries themselves have a lot of bureaucracy.

If you want the economy to grow, you’ve got to open up.