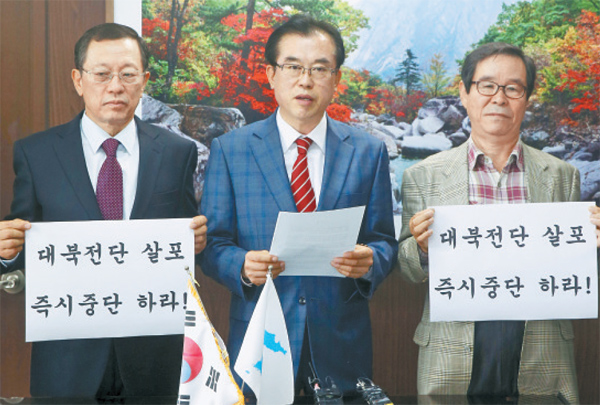 But the activists said they will go ahead and disseminate the fliers today as scheduled.

Seven conservative groups announced that they will release balloons carrying 500,000 leaflets with messages critical of the North Korean regime from Imjingak in Paju, northern Gyeonggi, near the western inter-Korean border. The distribution will begin at 1 p.m. today, the groups announced.

The North, which has reacted furiously to the civic groups sending the leaflets, issued yet another warning yesterday. Through the state-run Korean Central News Agency, Pyongyang said that insulting the dignity of its supreme leadership with the groundless lies expressed in the leaflets amounted to a declaration of war.

The North also added that the United States must feel ashamed that its dollar bills are being used for propaganda. The civic groups often send dollar bills with the fliers to lure more North Koreans into picking them up.

Earlier this month, North Korea fired at the balloons, which led to some shells landing across the demilitarized zone on South Korean territory, prompting Seoul to return fire from Yeoncheon, Gyeonggi.

Unification Minister Ryoo Kihl-jae said yesterday that the government does not have the power to stop the civic groups.

“The leaflets are exercising the [people’s] rights as stated in the Constitution,” he said. “The government will not change its fundamental principle and stance toward the leaflets.”

However, Ryoo also said that measures can be taken if there is a chance that the public will suffer physical and financial damage as a result of the groups’ actions.

“We are paying closer attention to people’s safety and the possibility that there may be a conflict between the rights groups and others,” Ryoo said.

Liberal civic groups and residents of Paju said they will physically block the activists at the leaflet launch site. The border city’s inhabitants said their safety is being threatened by the activists’ actions and that the situation is affecting the local economy, which is largely dependent on farming and tourism.

The police has dispatched troops to the area to prepare for a possible clash, according to local media reports.

A source from the National Police Agency told the press yesterday that the police cannot stop the rights groups from sending the balloons, but that they can intervene to prevent unfortunate accidents if violence occurs.

The tug-of-war over the leaflets is occurring at a sensitive time for inter-Korean relations as Seoul awaits Pyongyang’s response to a proposal for high-level government talks.

After the two Koreas agreed on Oct. 4 to resume high-level meetings, the South proposed that discussions be held next Thursday. The North has not responded yet, but it said that the South Korean government must stop civic groups from sending fliers if it wants contact to take place as agreed.