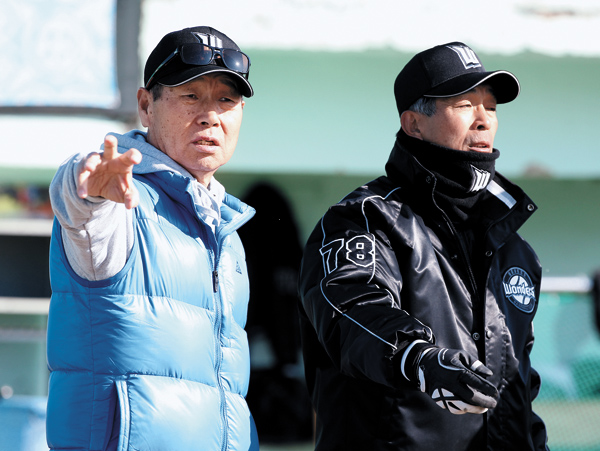 After weeks of rumors, it was revealed over the weekend that the Hanwha Eagles have signed Kim Sung-keun, former manager of the now-defunct Goyang Wonders, to a three-year contract on Saturday night as the team’s new head coach for 2 billion won ($190 million).

After the Wonders disbanded last month, rumors intensified. There were reports that Kim was spotted in Daejeon, that his aide was looking for an apartment in the city, and some even said that Kim had received a call from Hanwha Chairman Kim Seung-youn.

But Kim denied the reports on Wednesday, saying, “I’ve never been to Daejeon and never met with Hanwha. Hanwha feels uncomfortable with me, so they won’t take me.”

The 71-year-old veteran manager was referring to a call he received from the conglomerate two years ago, when he turned down the offer to coach because he was still heading the Wonders, which was the country’s first independent baseball club.

Before deciding to bring on Kim as manager, the Eagles said they initially intended to promote second-string manager Lee Jeong-hoon or the general manager’s special adviser Han Yong-deok to take the head position.

But Kim Seung-youn, who is also the club’s owner, reconsidered these promotions because of opposition from fans. Hanwha fans are known for their loyalty even though the team is usually at the bottom of the standings, but they were not supportive enough to let the club choose a new manager as it pleases.

A video clip on YouTube titled “We are Hanwha Eagles fans,” in which supporters call for Kim to be hired, was viewed more than 100,000 times. One fan went so far as to stage a solo protest in front of the club. All their efforts paid off on Saturday.

“I thank the owner Kim Seung-youn and fans, and I was moved that they trust me,” Kim said, according to a statement released over the weekend.

Kim was born in Japan and moved to Korea in 1960. He was a pitcher but retired early due to an injury and began his 45-year career as a manager when he was only 27.

Kim became known for taking second-tier teams into the postseason. But critics said that he could never beat the best teams to win the championship series. He calmed the controversy by winning four Korean Series titles with the SK Wyverns, who were stuck in the middle of the rankings when he arrived in 2007.

Admiration of Kim’s leadership has become a social phenomenon. He is called by the nickname Yasin, which means “god of baseball,” and often gives lectures about leadership which are attended not just by college students but also middle-aged people eager to learn about his strategies.

Those who are close to Kim say that although he seems stubborn, he is more passionate about baseball than anyone.

“He seems blunt and cold, but he is a different person inside,” said Park Cheol-ho, public relations director of the Korea Baseball Organization. “He talks harshly to the players, but it is always to make them better.”

When Kim manages a team, he tries to be in complete control. Once he knows he has the players’ respect, he demands a solid performance.

His demand for full authority over a team is the main reason why Kim has parted ways with the clubs he has coached, but fans now want him more than ever because of his persistence.

Hanwha has not advanced to the postseason since 2008, but Kim said he is optimistic.

“It is possible because there are many young players,” he said. “And players should constantly cultivate their abilities.”