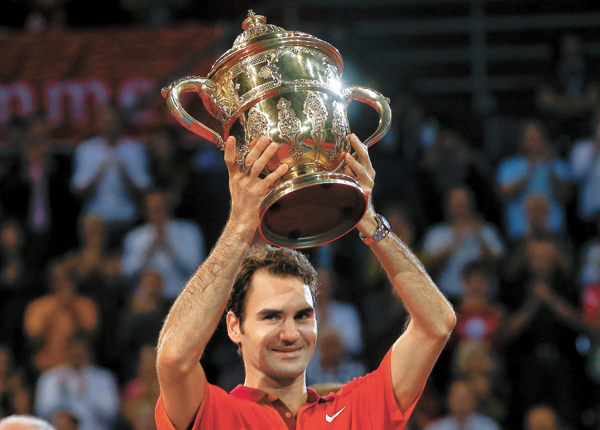 Federer took just 52 minutes to win 6-2, 6-2, delighting the partisan crowd as he inflicted what was only Goffin’s third defeat in 46 matches.

“I didn’t expect this kind of result but clearly I’ll take it, it’s great,’’ Federer said. “It’s indoors tennis, sometimes you just blow a guy out of the court and I’m happy it was me today doing that.’’

The first set lasted 23 minutes as Federer dropped just one point in the final three games.

The second-ranked Federer also moved a step closer to clinching the year-end No. 1 spot for a record-equaling sixth time as he moved to less than 500 points behind Novak Djokovic, with his fifth victory of the season.

“I was expecting it to be tough and him taking charge at times but I think I was really able to control the match with my serve and then with my variation on the return. I think I did really well, I was fresh today, it was again a fifth day of tennis for me in a row and I’m happy I’m able to keep it up time and time again, week after week.’’

Goffin had been in remarkable form since his straight-sets defeat to Andy Murray at Wimbledon but knew it would be a tough task against a player who - as he revealed on Saturday - is still his idol.

“It was a tough match of course, against Roger in his hometown,’’ said Goffin, who admitted he felt the pressure of it all in the buildup. “He is in great shape and he played so good today. It was too tough for me today. I made a lot of mistakes, I didn’t serve very well. But at the end it’s a good week for me and I’ll try to do better next time.’’

Federer was in front from the start as he broke Goffin’s serve in the very first game, securing the advantage when the Belgian hit a backhand wide.

The Swiss star followed that up with a winning serve and a 200 kph (125 mph) ace as he took complete control.

“He serves just perfect,’’ Goffin said. “You cannot read where it’s going and it’s not easy to return, that’s why it was a nightmare for me today.’’

Goffin fought to get back in the match but Federer was simply too strong, and a delightful crosscourt forehand handed him three break points, the second of which left him serving for the set when Goffin sliced into the net.

Federer quickly sealed the advantage with the third of four successive love service games, ending the set with an ace followed by an unreturnable serve.

Goffin opened the second set in the same way as the first, with a double fault. However, he was now being encouraged by the crowd - uneasy at the one-sided contest - and managed to hold his serve.

The 23-year-old Goffin saved one break point in the fifth game but hit a backhand into the net after a long rally to hand Federer another advantage.

And the 33-year-old Federer swiftly secured another double break to leave him serving for the match. A desperate Goffin challenged the call but replays showed Federer’s return had landed on the baseline.

The final point was delayed slightly by thunderous applause after Federer racked up two match points. He needed just one as he delicately placed a shot over the net, which Goffin managed to get to but couldn’t return.