Twins face rival Heroes in round 2

Twins face rival Heroes in round 2 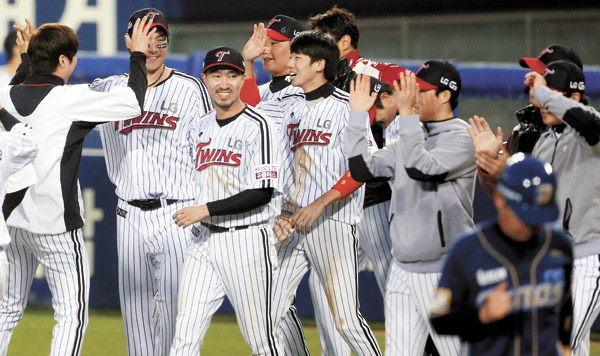 LG Twins players celebrate after beating NC Dinos 11-3 in their Game 4 of the postseason’s first round at Jamsil Baseball Stadium on Saturday. The Twins will now face their rival Nexen Heroes in the second round starting today. [NEWS1]

In the first round of the Korea Baseball Organization (KBO) postseason, the LG Twins beat first-timer NC Dinos to advance to round two for the second year in a row, and will now face its new rival, the Nexen Heroes.

In Saturday’s game, LG took an early lead with a two-run triple by Lee Byung-kyu in the bottom of the third inning. NC tried to reverse the game, scoring one run in the fifth and two more in the sixth, but LG widened the gap again with six runs in the sixth.

It is the first time that a team with a win rate of less than half has made it to the second round of the postseason. LG, which finished the season in the fourth, earned 62-64-2, a win percentage of .492.

Today LG will begin the best-of-five second round away at Mokdong Baseball Stadium in southwest Seoul, against the Nexen Heroes, which boasts four MVP nominees. The second round will get more attention from baseball fans because the two Seoul-based teams have fallen into a new rivalry in recent years.

However, the Twins must go into the competition knowing that they have lagged behind the Heroes most seasons. Since the Woori Heroes, (the former name of Nexen Heroes), were founded in 2008, LG has won 50 games against its rival and lost 76. Other than in 2010, when they were 10-9, the Twins were never stronger than Nexen. Instead, they have gotten worse; from 7-12 in 2011 against the Heroes, to 6-13 in 2012 and 5-11 last year.

But LG has played better this year. The team bounced back to 7-9 this season against Nexen, and its new manager Yang Sang-moon, who has led the team since May 12, seems focused on beating their rival. After Yang joined the team, LG pulled ahead to 6-5.

It doesn’t seem to be just luck, given that the Twins made a similar improvement against their first-round opponent NC. LG was 1-5 against NC under Yang’s predecessor Kim Ki-tae, but the Twins won seven games and lost three under their new manager this season, then won the first round of the postseason 3-1.

But Nexen, ranked second this season, has several MVP nominees on its side. Park Byung-ho led the league in home runs (52, the third most in KBO history) and RBIs (124) for the third straight year. Seo Geon-chang became the first KBO player to get 200 hits in a season, finishing with 201, and led the league in hitting with a .370 batting average. Pitcher Andy Van Hekken was the only one in the league to get 20 wins.

The winner of the best-of-five second round will compete in the Korean Series against the Samsung Lions. The three-time title holder led all teams this season except the Doosan Bears (6-10). The Lions had a 9-7 record against the Twins and 8-7-1 against the Heroes.