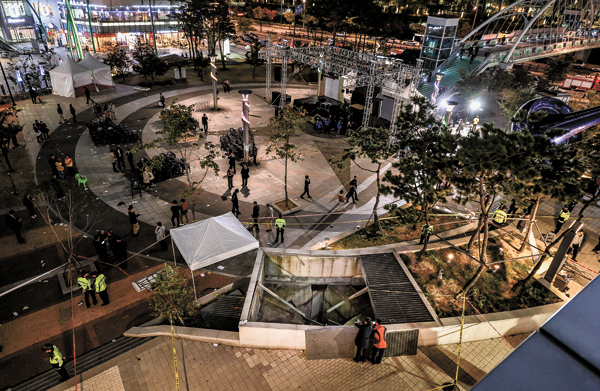 Sixteen people attending a free K-pop concert at Pangyo Techno Valley in Gyeonggi, died after the ventilation grate on which they were standing collapsed. [JoongAng Ilbo]

Over the past several months, Korea has been forced to reckon with a number of insurmountable tragedies.

The year started off with the fatal collapse of a gymnasium roof at the Mauna Ocean Resort in Gyeongju, North Gyeongsang, an incident which saw 10 people killed and many more injured. The majority of casualties were incoming first-year students at Busan University of Foreign Studies who were attending a welcoming ceremony.

The sinking of the Sewol ferry followed on April 16. The accident was the worst maritime disaster in Korea to date and killed more than 300 people, most of whom were 11th-grade high school students from Danwon High School in Ansan, Gyeonggi.

The tragedy had strong ripple effects across society and public trust in infrastructure and public transport plummeted. In the immediate term, the tourism and ferry industries suffered. People canceled or delayed trips and opted against traveling.

The commonality among these accidents was that, had proper steps been taken to ensure public safety and security, they could have been prevented. The results of the investigation into the fatal roof collapse in Gyeongju revealed that poor construction methods primarily contributed to the accident.

The Sewol ferry disaster was more complex, complicated by botched rescue operations and corruption among agencies within the shipping industry.

Still, this series of accidents spooked the public, so much so that some have even started to avoid mainstream cultural events, concerts and festivals over safety concerns.

Those fears were only enforced following an incident earlier this month at an outdoor concert at Pangyo Techno Valley in Seongnam, Gyeonggi, where a ventilation grate collapsed, sending more than two dozen spectators plummeting over 18 meters (60 feet) to the ground below. Sixteen were killed and 11 others critically injured.

The incident underscored the need for tighter safety regulations and sent off alarm bells at theaters and concert venues nationwide. Many smaller venues can get away with more lax safety measures - ignoring capacity regulations, for example, or skimping on security.

Unfortunately, this attitude appears to prevail in Seoul’s theater-heavy Daehangno neighborhood in Jongno District, central Seoul. One small theater in Daehangno, a mecca for small plays and productions, only has one entrance to the building.

With about 70 seats in its basement, the venue also doesn’t have an emergency exit. 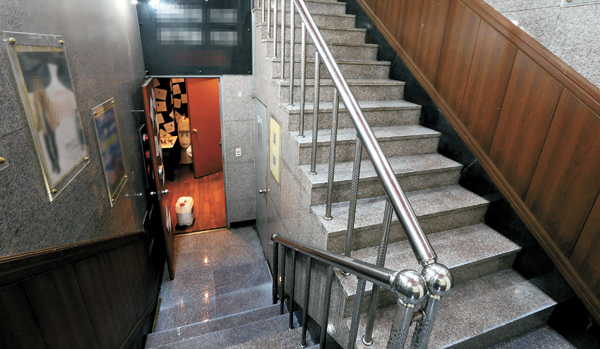 A narrow staircase leads down to an underground theater in the Daehangno neighborhood, a major cultural area in Jongno District, central Seoul. Many small theaters in the area have no emergency exit, which would be catastrophic in the event of a crisis. [JoongAng Ilbo]

The entrance, which would enforce a bottleneck effect in the event of disaster, leads audiences from outside down to the stage through a narrow set of stairs. The staircase itself is covered with old carpet - a glaring fire hazard - and there are no windows below ground or visible fire extinguishers. 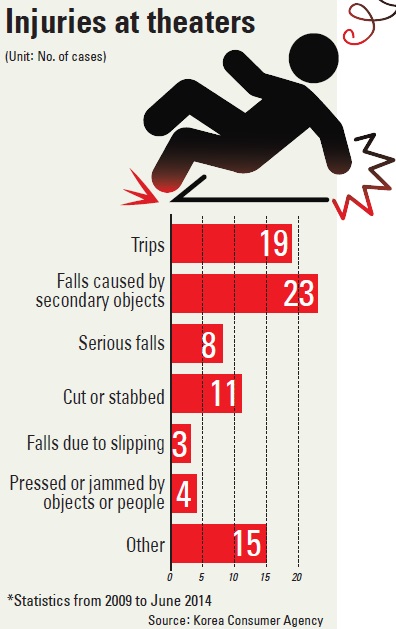 Before performances start, a company official typically tells audiences that in case of an emergency, they must calmly evacuate and follow the instructions. However, at a quick glance, such a feat seems almost impossible.

Reporters often come here to review plays and concerts, but these findings aren’t exclusive to one venue and can make appreciating the performances difficult.

Before the curtain rises, most theaters do explain evacuation procedures in the event of an emergency. But for some, even this process is presented as a form of entertainment for the audience, with humor injected to take the edge off such a serious subject.

In one instance, an understudy at a local theater was given this task.

“In case of fire, please be calm and follow the instructions from the guide,” the actor said.

However, that remark was immediately followed by the punch line, “But there isn’t any guide...”

The intent is to get a laugh out of the audience to warm them up before the show. But the idea, of course, is based on the dangerous assumption that such a fatal disaster couldn’t possibly happen there.

According to the current regulations, theaters smaller than 300 square meters (3229 square feet) are not mandated to follow fire regulations, which often means basic safety measures and equipment are lacking.

According to the Seoul Metropolitan Government, there are 189 theaters in Seoul that are not regularly inspected by local authorities, and 63 aren’t even registered as playhouses.

Because space is limited in these places, even a little lighting can hurt the dramatic effect of a production. A green-lit exit sign can easily take away from the ambience, and many venues tend to cover them with thick curtains or black duct tape. Sometimes the exit is behind the main stage, making it potentially more difficult for audiences to evacuate.

Among the 826 theaters in Korea, about 520 of are outside the reaches of the fire services act, according to lawmaker Yoon Jae-ok.

It is perhaps questionable why smaller theaters are so lax when it comes to safety measures. For safety, the determining factor often comes down to money, and informal venues like these often lack the funds required to maintain up-to-date safety standards. A day-long event at a sports center typically costs around 30 million won ($28,503) in insurance, for instance, an amount that might seem grandiose for companies with limited means.

Many companies also don’t hire additional security. There were approximately 1,200 events held nationwide in the first week of October, though it’s unclear how many followed all required safety steps.

Outside of Seoul, this effect is generally worse. Many provincial buildings lack facilities in case of catastrophe, largely due to the fact that they have fewer patrons. Company officials also rarely have any training when it comes to evacuation and rescue.

Those in event planning contend that controlling crowds at concerts is generally easier since such events are normally organized by local governments or businesses as well as free. Predictions on audience size and capacity are generally calculated beforehand, though scale can be tricky to estimate.

Over the past three years, more than 270,000 people have participated in events featuring traditional Korean performances, including extended evening hours at Seoul’s royal palaces, according to Saenuri Rep. Kim Hoe-seon. However, the government only allocates about 42 million won on average annually to help keep these events safe.

“Most of the safety budget is spent just to pay hired temporary workers who help organize the event on the day of,” he stated in a release.

“Simply put, one safety officer was looking after 33 citizens [on average] at these cultural events,” Kim added in his analysis of statistical data from the Cultural Heritage Administration (CHA) and the Korea Cultural Heritage Foundation.

The incident in Pangyo also underlined the fact that high-profile events, particularly those involving K-pop stars, present greater risks. Just a few years ago, hired security officers at these events would physical restrain rowdy crowds, though these instances have drastically decreased amid sexual harassment allegations.

The chances of an accident are higher on rainy days and during inclement weather, which can affect the sound system and grid, and performers are even versed on how to maneuver given the conditions.

Still, even in the face of gloomy forecasts, many concert organizers go on with the show, pressured by the economic impact and potential inconveniences of canceling.

The risk of accidents is also higher at concert venues where less attention is paid to detail. In 2011, a conductor fell into the orchestra pit at the Gyeonggi Arts Center at a rehearsal for a concert later that day. The venue argued that there were lights and a sign urging caution, though the man failed to see the warning and tumbled anyway.

The center has since installed a divider near the orchestra pit, though in most theaters such measures are not commonplace.

Since the accident at Pangyo Techno Valley, many local governments and lawmakers have voiced the need to revise current safety regulations that apply at theaters.

“Based on current law, smaller theaters fall into a blind spot in terms of keeping up with safety measures and that can’t guarantee the safety of audience members,” Saenuri lawmaker Yun Jae-ok said on Friday in a release.

The ruling party representative is currently pushing for a regulation that would require all theaters to receive regular safety checkups, as well as more advanced inspections for venues that have been operating for more than decade.

The Seoul Metropolitan Government yesterday began a special evaluation of all the 317 theaters in Seoul, which will last until next month. Theaters with less than 1,000 seats will be inspected by district offices, and venues that can house more than 1,000 will be checked by both the local district and the Seoul city government.

Meanwhile, the city authorities are also gearing up to revise current rules for outdoor festivals. According to current regulations, for outdoor concerts with more than 3,000 people, a host organization must turn over a safety and countermeasures plan to the relevant city office. Sanctions follow if rules are found to be violated.

Those rules, however, will eventually be tightened to require similar documents for events expecting 1,000 people. The city government is also reviewing a plan that would require all theaters to be registered, even the ones with less than 50 seats or those smaller than 50 square meters.