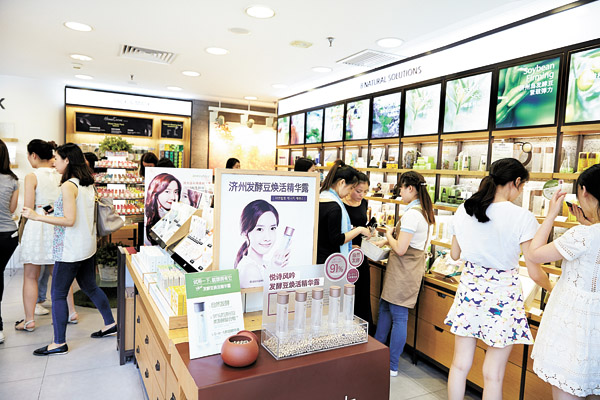 Chinese people browse and try out makeup products at Innisfree’s flagship store in Hongyi Plaza, Shanghai. China accounts for half of Amore Pacific’s overseas sales. Provided by the company

SHANGHAI - When Amore Pacific opened its factory here 12 years ago, the top priority of the cosmetics company’s chairman was building brand recognition in China.

The cosmetics company opened a new production facility and research center at the site this month after dismantling the old factory in Shanghai and another in Shenyang.

Five Amore brands - Sulwhasoo, Laneige, Mamonde, Etude and Innisfree - are currently sold in the world’s second-largest economy, registering an average of 30 percent sales growth annually during the past five years.

The number of Amore stores in China stand at 2,958.

The new facility, the company said, is intended to keep up with growing demand by Chinese consumers and centralize resources to strengthen its foothold in the Chinese market and other Asian markets, such as Singapore and Malaysia.

“The Chinese market is an important pillar of our business strategy,” said Suh Kyung-bae, chairman of Amore Pacific during a press conference at the Shanghai factory a day after the official opening. “The factory and research center will not only increase the quantity of products, but also enhance their quality through the research center and bigger distribution channels.”

The majority of products manufactured at the Shanghai Beauty Campus will be in the Mamonde line.

The logistics center at the campus will work with distribution channels in Shenyang and Chengdu with a goal of reducing average delivery time from a week to three or four days.

The first and second floors of the facility consist of manufacturing and packaging lines, along with distribution centers. The third floor is equipped with facilities for employees, including fitness centers, discussion rooms and rest areas.

“The equipment is very advanced and will allow us to conduct a range of research, from product development and testing to studying organic materials for more nature-friendly makeup products.”

The research center also will facilitate the development of products tailored to Chinese consumers.

“Chinese women are especially conscious about cleansing, because they are aware the atmosphere in China is bad and not good for their skin,” said an official who manages an Innisfree store in Shanghai. “So we have a set of specialized cleansing products that we don’t sell in Korea.”

Inside a large swath of the Shanghai Beauty Campus is vacant where the company plans to build a second factory. 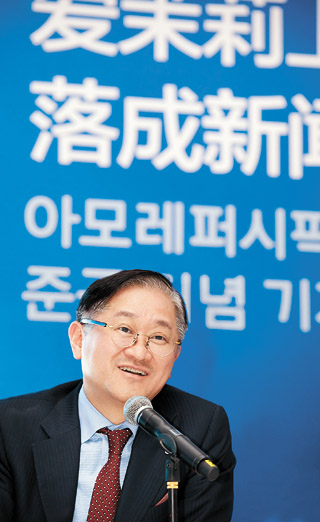 “If sales increase at the current pace,” said the chairman, “the new manufacturing lines would also fail to meet the demand by 2020.This is why we bought the extra land and will build additional factory in 2020.”

Boosted by success at home and abroad, share prices of Amore Pacific doubled in less than a year from the 1 million won ($945) range to more than 2 million won.

The main reason behind the surging price is investors’ expectation that people from China and other Southeast Asian countries will drive sales growth.

Global sales of Amore Pacific Group drastically increased over the past three years.

Amore’s makeup products shipped or sold overseas account for 21 percent of sales last year. Of that, the Chinese market accounts for about half. 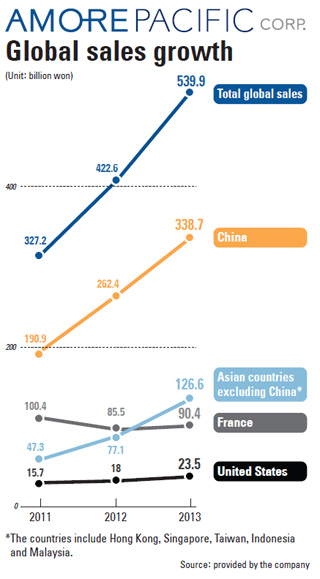 Popular Korean dramas and celebrities are contributing to the booming sales.

“Most of our customers are aware that Laneige is a Korean brand,” said Zhu Rong, a 32-year-old seller at Laneige at Parkson Department Store in Hong Kong. “They especially admire the look of popular Korean actresses such as Laneige’s model, Song Hye-gyo.”

Entering an Innisfree store in Hongyi Plaza in Shanghai, salespeople say hello in Korean. Some of the products have labels in Korean.

The store manager said that it is one of strategies to attract more Chinese customers.

“Due to the huge popularity of Korean culture, Korean-made products mean something cool and high quality,” said Kim Seon-kyung, the manager.

“Asian beauty means a harmonious blend with nature and people and encompasses the inner and outside beauty in human beings,” he said.

“What distinguishes us from other brands is the identity, so we will cement the vision in the future rather than following suit other brands.”