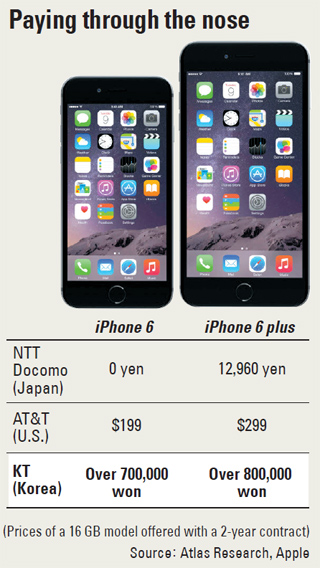 Will Apple’s larger smartphones, the iPhone 6 and 6 Plus, lead to lower prices for Korean smartphones, helping consumers more than the government’s Mobile Device Distribution Improvement Act?

Apple’s new iPhones will finally arrive in Korea on Friday, and although the company only has a 7 percent share of the Korean market as of October, industry insiders say the new models could boost its share to the highest levels ever.

And that has domestic smartphone makers worried.

LG U+, the third-largest carrier, received more than 20,000 reservations in 20 minutes.

Online and offline reservations don’t necessarily mean that people are actually going to buy the iPhones, especially since none of the carriers have yet announced prices for the devices - which come in 16GB, 64GB and 128 GB models - or the amount of subsidies they will be offering. Industry sources said many customers made reservations at more than one carrier to be able to compare the discount offers when they are finally announced.

“Mobile carriers have had a hard time attracting customers due to the new mobile law that was passed to benefit customers but actually cut the amount of subsidies,” a spokesman of a mobile carrier said.

“But about a week before the carriers took reservations for the new iPhone models, more subsidies for domestic brands such as Samsung were offered, attracting many people who were not interested in iPhones but were waiting for more discounts.”

In the first week after the law was enacted, only 23,784 people changed their carrier to purchase a new phone, but the number has been increasing as the subsidies rose. In the second week, 32,978 people changed accounts and in the third week (from Oct. 15 to 21) 52,794 did.

“There are opinions that the market share for iPhones in Korea will rise to between 15 to 20 percent,” said Lee Byung-tae, a professor of business at Kaist. “Domestic manufacturers such as LG are saying that it is impossible to lower their factory prices, but the industry believes that they will start lowering prices for popular models [including the Samsung Galaxy Note 4] once they see iPhones making such inroads into the domestic market.”

“Now the concern is shifting to the price for the iPhones that will be set by mobile carriers on Friday [Oct. 31],” said an industry source. “In the last few weeks, Korean customers have been carefully monitoring the prices offered overseas to compare. If they think the prices are too high and the amount of subsidy is too low, they might consider second or third options.”

In Japan, for instance, a 16GB iPhone 6 is offered for free for customers making a two-year contract with mobile carriers NTT Docomo, KDDI, or Softbank while it is being sold for $199 in the United States by Verizon, AT&T, Sprint or T-Mobile. Softbank’s market share in Japan rose from 16.6 percent in 2007 to 24 percent as of last year after it offered massive subsidies on iPhone models.

One option for people sick of comparing complex mobile carriers’ offers is to buy an unlocked device at Apple Stores that sell an iPhone 6 16GB device for 850,000 won and iPhone 6 plus for 980,000 won. Under the law, a customer with his own device receives a 12 percent discount on mobile charges under a two-year contract.

Another surprising option is Daiso, as known as the 1,000 won store, which has announced it will be offering the iPhone 6.

Daiso hasn’t set a price as it only started taking reservations from Friday at their 30 stores in Seoul and Gyeonggi. But the company said a customer can save money as it offers products in a simpler distribution structure than mobile carriers. It also said customers will get a 15 percent discount on monthly phone charges if it buys the phone from it.

“We are considering adding more automated retail machines at our stores since we saw many customers willing to purchase devices at lower prices,” a spokesman of Daiso said.

“The maximum subsidy limit set by the new mobile law is a barrier for domestic manufacturers that must be flexible in dealing with various market situations,” Kaist’s Professor Lee said. “The government needs to revise the law to prevent customers from getting fewer benefits.”