Keen cartographers congregate in Korea to muse over maps

Keen cartographers congregate in Korea to muse over maps 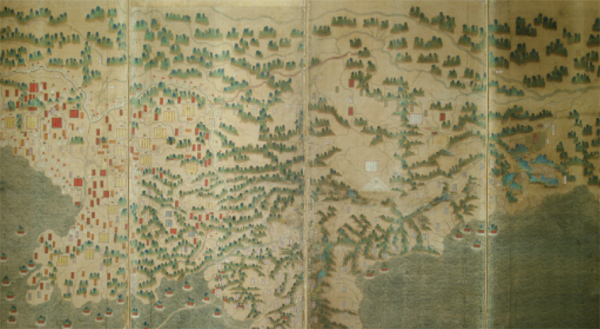 A 1706 map of the Korean-Chinese borders between Liaodong Peninsula and Beijing (Treasure No. 1542).

Early map enthusiasts from all over the world gathered in Seoul last week to get a glimpse of some of the most precious ancient Korean cartography, which also includes some state treasures.

The U.K.-based International Map Collectors’ Society held its annual international symposium at the National Library of Seoul in Korea between Oct. 21 and 24. Founded in 1980 in London, the group consists of map collectors, dealers, archivists, librarians, academics and writers - or simply map lovers from all corners of the globe.

On Wednesday, the members of the society visited the Kyujanggak Institute for Korean Studies, affiliated with Seoul National University, and pored over some of the old Korean maps that are kept there.

Hans D.A. Kok, the chairman of the society’s executive committee, said he is amazed by the size of Korean maps.

“In the case of Dutch maps,” he explained, “because many of them were drawn on papers, there was a limitation as to how big they could be. But because Korean maps are drawn on silk [and paper], they could be much larger than their Western counterparts.”

Kok added that he is impressed by how the Korean cartography relics are pieces of art in their own right. He explained that although old Dutch maps are similarly attractive, they later became more mathematical rather than artistic.

The rare maps the society saw included Doseongdo (Treasure No. 1560), an 18th-century depiction of downtown Seoul; a 1706 representation of the Korean-Chinese borders between Liaodong Peninsula and Beijing (Treasure No. 1542), which was drawn on a 10-panel folding screen for military purposes but also displays beautiful colors and lines; and Dongyeodo (Treasure No. 1358-2), an 18th-century map of the Korean Peninsula that is drawn on a 23-page folding book and is renowned for its remarkable details and accuracy. 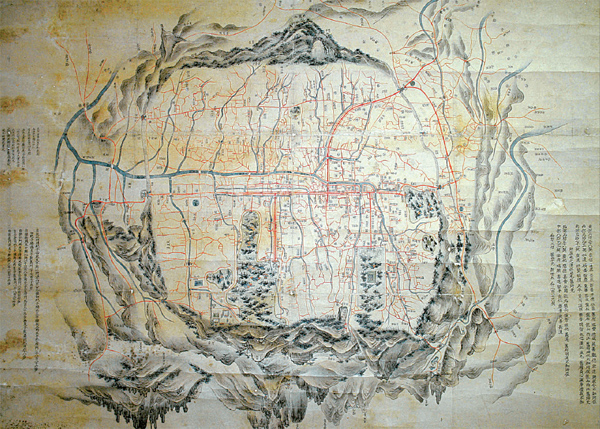 An 18th-century map of downtown Seoul (Treasure No. 1560). The two were among early Korean maps designated as state treasures that participants of the annual symposium of the International Map Collectors’ Society enjoyed last week. The symposium was held in Seoul between Oct. 21 and 24. Provided by the Cultural Heritage Administration

To mark the occasion, the National Library of Seoul also exhibited a few of its old maps, some of which are Korean treasures. They included the “Ranch Map” (Treasure No. 1595-1), a 42-page drawing from 1678 that depicts horse ranches in different provinces and counties. In the late 17th century, Korea increased the number of horse ranches across the country in order to strengthen its military.

The theme of this year’s symposium was “Peace on Maps in East Asia.”

After “Kunyu Wanguo Quantu (A Map of the Myriad Countries of the World),” published 1602 by Italian missionary Matteo Ricci in China, “maps became a particularly useful medium in East Asia for showing the world.

“Since then, maps have been a symbol of peace, together with the interchange of culture,” the organizing committee said on the symposium’s website. 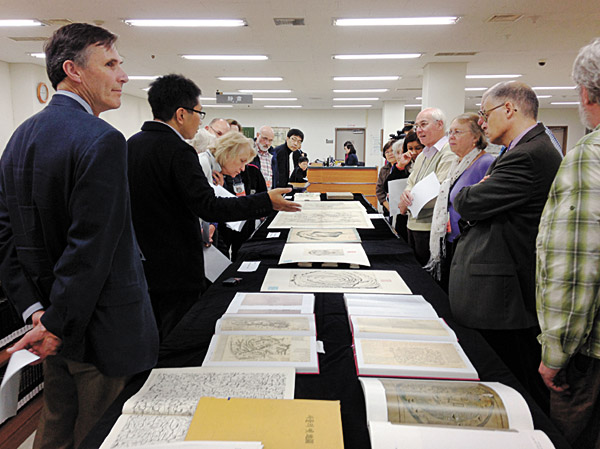 The map is the earliest known world map of China that uses the style of European cartography. It was crucial in expanding China’s knowledge of the world.

Lee Hye-eun, a curator at the National Library of Korea, explained that many members of the society are also map producers, which is why raising their awareness of Korea, its history and culture is important - given the country’s ongoing dispute with Japan on territorial issues such as the Dokdo islets and the naming of the sea between the two countries.

“We chose peace as the theme because we believe [with raised awareness] there can be a peaceful resolution to the issues,” Lee said.

Participants also shared their academic papers on Korean maps at the meeting.