Unification can be planned for

Unification can be planned for 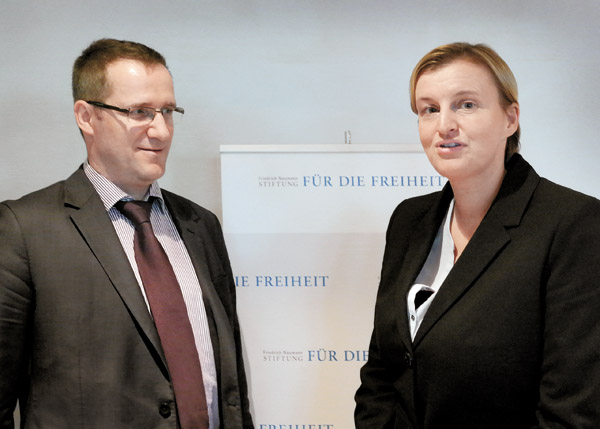 Stefan Garsztecki, left, professor of political science at the Chemnitz University of Technology, and Dagmar Pruin, executive director of the non-governmental organization Action Reconciliation Service for Peace, at Somerset Palace in central Seoul earlier this month. By Sarah Kim

Objective, self-reflective history education in schools and efforts to build trust between East and West Germany, as well as with its neighbors, were key factors in the country’s unification and reconciliation with the rest of Europe, according to two German experts on this topic.

Such lessons may be applicable to the situation on the Korean Peninsula and in Northeast Asia amid tensions stemming from Japan’s swing to the far right.

“The key point to any reconciliation process is that you have people who talk to each other face-to-face,” said Dagmar Pruin, executive director of non-governmental organization Aktion Suhnezeichen Friedensdienste (Action Reconciliation Service for Peace). “This is kind of a trust-building instrument.”

That is why, Pruin said, the work of civil societies and NGOs is important in such a situation - especially when there is limited political dialogue.

Action Reconciliation Service for Peace, founded by Protestants in 1958, is a German non-profit organization that fights racism, anti-Semitism and other forms of discrimination. It was founded with the acknowledgement of Germany’s guilt for Nazi crimes and promoted reconciliation with affected countries, operating in both East and West Germany.

“When we started in 1958,” Pruin said, “we wanted to offer signs of atonement for what the Germans did in World War II, and there were partners who took that hand and dreamt the dream 15 years before politicians could walk that path.”

The two German professors were panelists at the 9th Jeju Peace Institute - a joint workshop of the Friedrich Naumann Foundation for Freedom on “Historical Reconciliation and the Future of North East Asia: Lessons from the German Reconciliation Process” on Oct. 15.

The forum, organized by the Seogwipo-based Korean policy think tank Jeju Peace Institute and the Friedrich Naumann Foundation for Freedom’s Korea Office discussed what lessons could be drawn from the German experience for the future of Northeast Asia, especially in light of prevailing tensions on the Korean Peninsula.

After World War II, West Germany used foreign policy to promote understanding and reconciliation, especially with countries such as France, Poland and Israel. This happened in conjunction with the tension from the East-West conflict until the fall of the Berlin Wall.

“In my opinion, it was and it is still very important to come to terms with the past,” Garztecki said in the interview. “It means to explain, to do research,” in regards to Germany’s reconciliation with its neighbors.

“In education within Germany, it was and is still very decisive that you have a critical approach to your own history,” said Garztecki. “We are not building heroic narratives.”

It helps that education in Germany is not centralized, said Pruin. “And now we are doing Holocaust education much earlier than in the 1970s.”

Garsztecki spoke of the challenges of German unification as it tackled anti-German stereotypes in countries such as Poland and former Czechoslovakia, paired with a negative perception of the East and general ignorance in German society.

“Germans for generations were educated and brought up with a perception of France as an eternal enemy,” he pointed out.

“It was very important for Germany that the neighbors finally accepted German unification. Looking at German history, there might have been a lot of mistrust and misunderstanding among its neighbors.”

As an example, the Polish government supported the German unification process. This is because since the 1970s, Poland had contact with West German politicians and also with East German civil societies and opposition party members to “build up trust over the decades.”

He said, “If you look at the relations of Germans with its eastern neighbors, till the beginning of the 1970s, there was no relationship with Poland. Nevertheless, there were contacts between individuals organized by NGOs, between people of both sides.

“And finally, they could trust the Germans wouldn’t misuse their new power as a unified Germany,” Garsztecki said. “It was a long process.”

Elements of that process may be applicable to the Korean Peninsula, such as exchanges between universities and scholars. “Start at the low-level,” Garsztecki said. “You never know.”

In regards to Japan’s unapologetic attitude for its colonization of Korea, he said, “You have to try to try to understand your partner in the region because you can’t change geography, you can’t change history… This doesn’t mean you must accept all interpretations but first try to find a possibility for communication.”

Germany worked hard to earn the trust of the countries it victimized during World War II. “First and foremost, I would say, Western Germany as a free, democratic country accepted its political responsibly for the misdeeds of the Nazi regime,” Garsztecki said. “It was the political will of all political parties in parliament to come to terms with France and with Poland.”

He added: “You need to have a partner to forgive and accept your hand.”

Pruin, also the director of Germany Close Up, a youth program which she founded in 2007 bringing Jewish North American students and young professionals to Germany, said she realized after her first visit that the situation on the Korean Peninsula “is more different than similar to the situation in Germany.”

She said she knows of only a handful of marriages or partnerships in her generation between East and West Germans, even in Berlin.

That cultural gap is diminishing, Garztecki added. “For my students born in the 1990s after unification, it doesn’t matter anymore.”