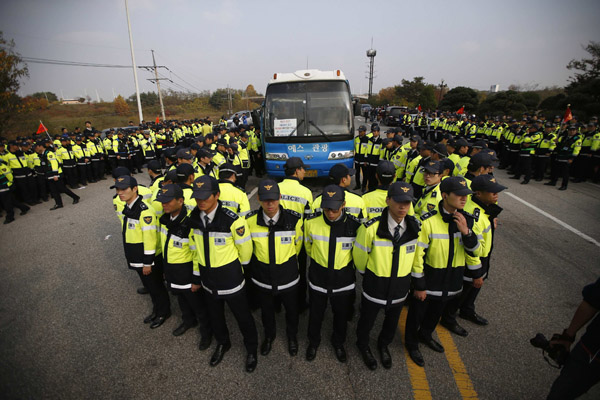 A bus transporting members of an anti-North Korean civic group is surrounded by South Korean policemen near the Demilitarized Zone separating the two Koreas in Paju on Saturday to keep it safe from local residents and liberal civic group members who oppose the launch of balloons with propaganda leaflets critical of the North Korean leader. [REUTERS/NEWS1]

Residents of the border town of Paju tried stopping civic group members from sending propaganda leaflets critical of North Korea via balloon across the Demilitarized Zone Saturday, throwing water bottles and eggs at them.

Despite the day-long protest by Paju residents and liberal civic group members, Park Sang-hak, organizer of the campaign, managed to fly a helium balloon containing 20,000 leaflets across the border late Saturday night. But he had to move twice, finally succeeding in Gimpo, Gyeonggi.

Clashes erupted Saturday afternoon when campaigners tried to dispatch up to 100,000 leaflets in a number of balloons from Imjingak in Paju, about seven kilometers (4.3 miles) south of the Demilitarized Zone. Local residents blocked the entrance to Imjingak with 19 tractors and some liberal civic group members wearing face masks got inside conservative groups’ trucks and tried to destroy leaflets.

Confronted by hundreds of opponents, a coalition of anti-North groups remained in front of Imjingak for about five hours before moving to Mt. Odu Unification Observatory, 20 kilometers (12.4 miles) west of Imjingak in another attempt to launch the balloons. The campaigners, many of whom are defectors from the North including chief organizer Park, were blocked by Paju residents from entering the area. Hundreds of police prevented physical clashes between the groups.

Then seven members of the coalition group moved to a mountain in Gimpo on Saturday night without any media members accompanying them.

They managed to launch one balloon with 20,000 leaflets. The leaflet boasted of the rapid economic development in the South that took place under the guidance of former President Park Chung Hee, the father of incumbent Park Geun-hye, and criticized dire human rights conditions in the North. Some leaflets were accompanied by a U.S. dollar bill.

North Korea expressed its disgruntlement at the Park Geun-hye government Saturday through state-run Korean Central News Agency, which blasted the police in the South for doing nothing to stop “the malicious act.”

The clash between Paju residents and anti-Pyongyang activists came amid rising fears among residents that the North would retaliate against the campaign by shelling the origin of the balloons, a scenario they say would endanger their lives and livelihoods. The North Korean military fired at the balloons on Oct. 10, which led to an exchange of fire from border units.

Pyongyang has been so sensitive about the air-borne leaflets that it has likened them to a declaration of war and has threatened to cancel an anticipated round of high-level talks between the two Koreas unless Seoul stops the campaign.

The Seoul government has said it has no legal basis for it to stop the activists, citing the freedom of expression granted by the Constitution.

Prof. Lee Woo-young at University of North Korean Studies told the Korea JoongAng Daily that the government should seriously consider forcing the activists to stop their activities because letting them continue would “inevitably threaten its citizens” in border towns.

“I highly doubt what the value of sending the leaflets to enlighten North Koreans at a time when they already have many ways of getting materials from the South.”