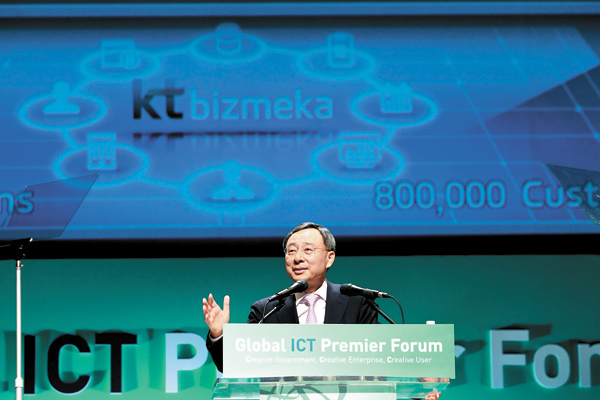 Hwang, who was a keynote speaker at the event, emphasized that the country needs more small companies with high annual sales and strong ICT, called hidden champions, to help the economy improve. Hidden champions are companies that have annual sales of 5 billion euro ($6 billion) or less but are among the top three companies in the world in their field.

In order to create these enterprises in Korea, the chairman said that conglomerates should turn to small and medium enterprises to assist with research, and also allow them to access resources.

Hwang also said that for Korea’s creative economy model to succeed, joint innovation between companies and countries is necessary.

“In conjunction with open innovation, we need to connect the research and development capacities of academic and industrial institutions to seek answers for the ICT industry,” he said.

He mentioned that large corporations should turn more frequently to SMEs and start-ups, which are often better connected with customers, to help develop their ideas based on consumers’ needs.

“Only when SMEs expand into the global market, utilizing R&D, marketing and global partnerships with large corporations, can we foster Korean K-champs,” Hwang said.

The chairman said the company will help incubate Korea’s hidden champions by increasing its support for small and medium start-ups by giving them free access to KT’s business platform, Biz Mecca.

In addition, KT said it will help about 1,000 start-ups at Pangyo Techno Valley in southern Gyeonggi by developing the Pangyo Creative Economy Innovation Center into an ICT hub for the companies to use.

“As mobile carriers’ roles are being emphasized in the ICT convergence businesses, open cooperation including distributing frequencies and standardizing the Internet of Things is more important than ever,” Hwang said.

At the Global ICT Premier Forum, scholars, CEOs, policymakers and experts in ICT gathered to share their ideas about the industry.

Other speakers at the forum emphasized that conglomerates should engage with small businesses to pursue mutual growth outside the country.

Kim Sang-hun, CEO of Naver, said his company was planning to connect its messenger app Line with a local delivery app, Baedal Minjok. He said that the delivery service will then be accessible to Japanese users of Line.