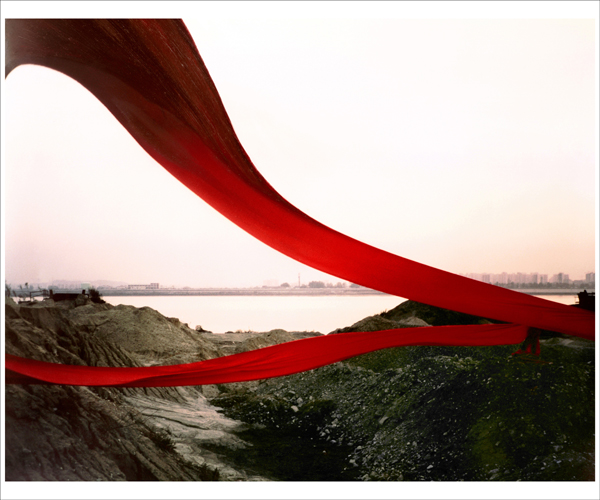 “Wind,” a photograph of Lee Seung-taek’s performance art that creates “sculptures without forms.”

Korean artist Lee Seung-taek has emerged under international spotlight in the past few years. His work “Godret Stone” was included in the Tate Modern London’s collection last year. He was also invited to Frieze Art Fair’s “Masters” exhibition and “Sculpture Park” show, which took place in the English capital’s Regent Park from Oct. 15 to 19.

Art fans expecting Lee to be a young man will be surprised - he is 82 years old now.

“Until a few years ago, my works had never been sold for five decades,” Lee told local press at the beginning of a small-scale retrospective at Gallery Hyundai in central Seoul.

“Paradoxically, thanks to that, I could do every experiment without needing to consider the tastes of potential collectors,” he said. “And my oeuvre has been well preserved.” 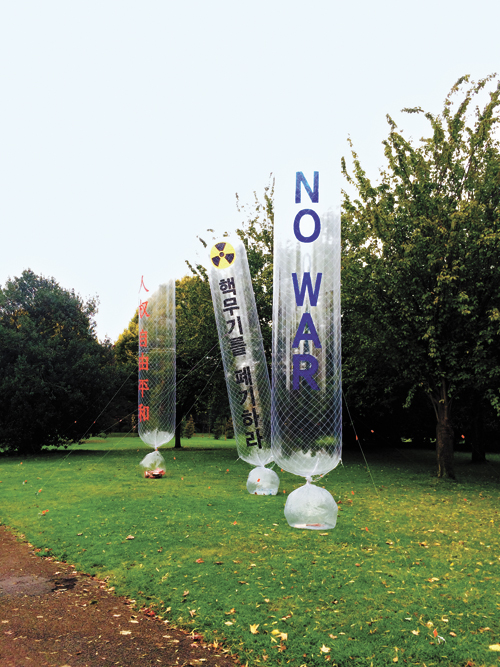 The 82-year-old again broke the fixed idea that sculptures should be solid by presenting works resembling balloons that South Korean civic groups send to the North carrying propaganda leaflets at Frieze Sculpture Park in London. Provided by Gallery Hyundai

His oeuvre includes photographic records of his creative performances, which focus on turning non-material things such as wind and fog into art. The most famous among them is the “Wind” series, in which Lee makes wind visual with a long, red cloth.

“I wanted to make sculptures without forms,” Lee explained. “I always think inversely and paradoxically. My early work ‘Godret Stone’ [1958] also resulted from the inverse thinking that stones can be soft. I tied stones with strings and hung them so that they should look soft ... so that their materiality transforms.”

In Frieze Sculpture Park, he again breaks the fixed idea that sculptures are solid by presenting works that resemble the balloons carrying propaganda leaflets, which South Korean civic groups send to the North.