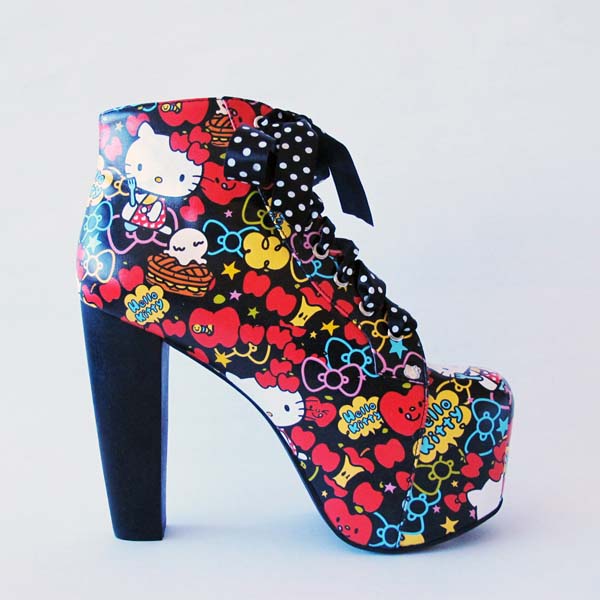 The married couple turned the garage of their San Francisco home into a permanent showroom for their vast Hello Kitty collection. Museum-style glass cases hold hundreds of rare and vintage Kitty items, including a rotary phone from 1976 and a gumball machine from 1983. A four-foot-tall fiberglass statue of the Sanrio character, which Garrett calls ``the holy grail of our Hello Kitty collection,’’ stands in the corner.

The couple met and bonded over the little white cat (or the little girl with kitty ears and whiskers, if you prefer), and will be traveling to Los Angeles this week celebrate the character’s 40th birthday at Hello Kitty Con, a four-day festival dedicated to all things Kitty.

“This is the first time there has ever been a fan convention of this kind,’’ Sanrio spokesman Dave Marchi said. ``It’s the only one happening anywhere in the world.’’

And it’s already sold out. More than 25,000 fans are expected; An exhibition at the neighboring Japanese American National Museum, ``Hello! Exploring the Supercute World of Hello Kitty,’’ will continue through April 26, 2015.

Garrett and Eslamieh, both 32, were already Hello Kitty fans before they met, and their union has only fueled their fandom. Though most of their Sanrio collection lives in the garage-turned-showroom, there are pieces sprinkled throughout their house. The couple keeps a mini Hello Kitty kitchen inside their real kitchen, and they hand-painted a skylight above their dinner table with Sanrio characters.

“It’s a pretty substantial part of our interests together,’’ said Garrett, a lanky man with an armful of tattoos. ``It does sort of guide and direct the things we do.’’

During their courtship, Garrett worked at a Sanrio store where Eslamieh would often visit. When the store closed, they bought its giant Sanrio sign, now on display in their showroom.

They visit Sanrio stores where ever they find them. They made a special trip to Japan to visit PuroLand, Tokyo’s Sanrio theme park, and went to Honolulu’s Sanrio Cafe on their honeymoon.

``I always wanted more Sanrio,’’ said Eslamieh, who has a Hello Kitty tattoo on her shoulder and a Sanrio symbol on her wrist. The college professor confessed that her mother once called a radio psychiatrist for advice about her daughter’s lifelong obsession with Kitty/kiddie characters.

“You have to like cute things, and that’s just not some people’s personality,’’ said Eslamieh, who keeps her love of Kitty separate from her professional life. ``The products and designs are simple enough and cute enough that they fit in a semi-sophisticated home.’’

Garrett, an elementary school teacher, has always been a collector. He came to Hello Kitty through comic books and anime, inspired by the breadth of characters and products available. He collects video games, too, and has 676 of the 677 original Nintendo games.

“Marty inspires the collecting part,’’ Eslamieh said of her husband, who also considers himself ``the biggest Monkichi fan’’ - another Sanrio character that looks like a monkey. He boasts a complete collection of everything Monkichi has appeared on, housed in a floor-to-ceiling closet in the couple’s guest room.

“There are so many pressures in this profession that can bring you down, so it’s good to stay afloat with the cuteness of Hello Kitty and Sanrio,’’ he said.

“And especially that he’s a man,’’ Eslamieh added, “it gives boys license not to have to be so macho.’’ AP