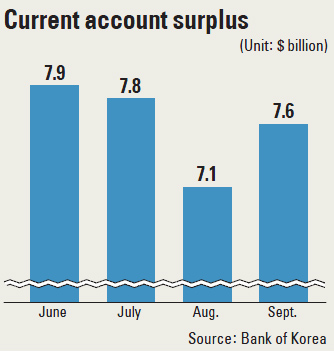 The current account surplus rally has continued for the 31st consecutive month.

According to the Bank of Korea, the surplus for last month was $7.6 billion, up from $7.2 billion in August.

The central bank is confident the current account surplus will easily achieve the BOK’s 2014 goal of $84 billion. In the first nine months of the year, the cumulative surplus is $61.8 billion, 12.4 percent ($55 billion) more than the same period last year.

If the current account surplus reaches the goal, it will beat last year’s record total of $79.9 billion.

The central bank cited exports as the main contributor to the September surplus. Exports turned around from a 1.8 percent year-on-year decline in August to increase 0.8 percent to $51 billion.

“Exports in the third quarter shrank compared to the previous quarter, but considering the foreign exchange rates, exports have done quite well,” said a BOK official.

By region, exports to the United States saw a strong growth of nearly 20 percent, and shipments to China were up 6.5 percent. However, exports to other advanced economies didn’t fare well, dropping 5.1 percent to the European Union and 6.2 percent to Japan.

There also were signs of improvement in the domestic market with imports rising 3 percent year-on-year to $43.3 billion in September, compared to a 2.1 percent drop in August.