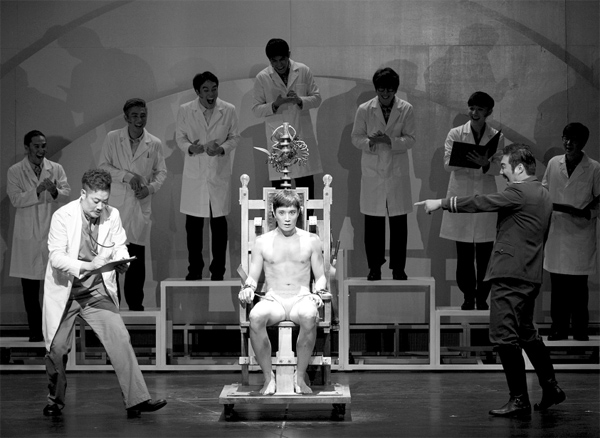 Korean musical “Woyzeck,” based on a German tragedy written by George Buchner, is being staged at the LG Arts Center. Provided by the organizer

JANG KIHA AND THE FACES 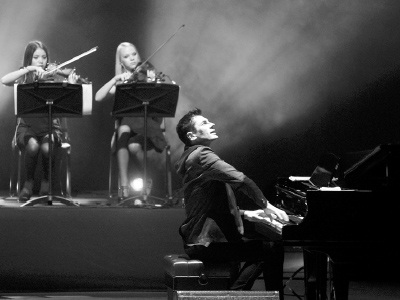 To Nov. 2: Considered one of the most successful indie bands in Korea, Jang Kiha and the Faces recently released a third full-length album and will tour until November in celebration.

Hapjeong Station, line No. 2 and 6, the passageway between exits 8 and 9.

Nov. 2: World-famous rock band Mr. Big is returning to Korea to celebrate their eighth full-length album, “The Stories We Could Tell.” Mr. Big rose to stardom in 1991 with their self-titled album, “To Be With You.”

MAKSIM AND HIS BAND

Nov. 5 and 6: Maksim Mrvica, a Croatian crossover pianist, is holding concerts in Korea again with a full band. Lyrical piano music was mainstream before Mrvica, but his dynamic piano playing, accompanied with electronic sounds and strong beats, has changed the trend. The show features a selection of his popular tracks and music from his new album.

Nov. 6: Solo violinist Clara-Jumi Kang and the ensemble Soo, which contains string soloists from the Seoul Philharmonic Orchestra, will gather for a classical concert.

Nov. 12: Nu metal band Limp Bizkit is visiting Korea for the first time in five years. The group is a popular rock band that has sold 35 million albums and has more than five million fans around the world.

Nov. 24 to 25: World-famous singer-songwriter Jason Mraz is holding a concert in Korea to celebrate his fifth regular album, “Yes.” Female rock-folk band Raining Jane, which Mraz has worked with since 2007, is joining this world tour after making an album together.

Nov. 28 to 30: International Korean-Japanese musician Yang Bang-ean is holding a solo concert to “show his own personality,” according to the event’s organizers.

Dec. 5 and 6: Jack Black, who is famous for his movies “School of Rock,” “High Fidelity” and “Kung Fu Panda,” is coming to Seoul as part of Tenacious D, the duo he performs in with guitarist Kyle Gass. Known as one of the biggest cult bands in the world, Tenacious D is stopping in Seoul for two days on its Asia tour. Private Curve, the organizer, said it’s been trying to invite the duo for the past five years and “finally managed to organize the concert as an Asian tour, having the Seoul concerts in the core.”

Dec. 25: Christmas is just around the corner, and Yuki Kuramoto will once again perform “Christmas Concert.” This time, famous classical violinist Richard Yongjae O’Neill will join him. Kuramoto has been holding concerts with special guests around Christmas since 2008.

Nov. 1 to Feb. 1: “Marie Antoinette” is being presented in Korea for the first time. The musical conveys a story of two parallel lives; the Queen of France, who is considered France’s most misunderstood monarch, and Margrid Arnaud, a poor woman. But the French Revolution changes everything. Margrid rises as a revolutionary while Marie falls.

This upcoming musical directed by Gina Lee delves into a Dorian Gray-esque theme of trading the soul to the devil. Set in 20th-century New York, Wall Street broker John Faust makes a deal with Devil X for financial success. But the richer Faust gets, the greedier he becomes, until his wife Gretchen senses that something is wrong.

To Nov. 8: Director Yoon Ho-jin’s Korean musical “Woyzeck,” which is based on a German tragedy written by George Buchner, is being staged at the LG Arts Center. After its premier in July, the art center has decided to stage it for a second time. The story is based on a real murder case in Germany during the 1820s and illustrates the “perennial tragedy of the human class that fails to escape from its environmental restraints,” according to the producers.

The show starts at 8 p.m. on weekdays; 3 p.m. and 7 p.m. on weekends. There are no performances on Mondays.

Nov. 14 to 16: This ballet performance, directed by world-famous choreographer Angelin Preljocaj, will give a feast for the eyes with outfits created by Jean Paul Gaultier, who was the costume director for “The Fifth Element.” Gustav Mahler’s symphonies have been selected for this production of “Snow White.”

The show has been held at famous arts halls around the world, including the Lincoln Center.

To Jan. 10: The story of a princess poisoned by her envious stepmother and revived by a prince’s true-love kiss is most widely known as the fairy tale “Snow White.” The musical has been presenting an adaptation of Snow White since 2001, but the performance stars a mute dwarf, Bandari, who harbors special feelings for the protagonist.

Shows start at 8 p.m. Tuesday through Friday; at 3 p.m. and 6 p.m. on Saturdays and at 2 p.m. and 5 p.m. on Sundays and public holidays. There are no performances on Mondays.

Dec. 14 to March 29, 2015: The public is already familiar with the movie “Once,” which tells the tale of a Czech immigrant who falls in love with a street performer. The Seoul Arts Center is now presenting the same storyline but now as a musical. The movie attracted audiences of more than 200,000 and became an unprecedented box-office hit as an independent film.