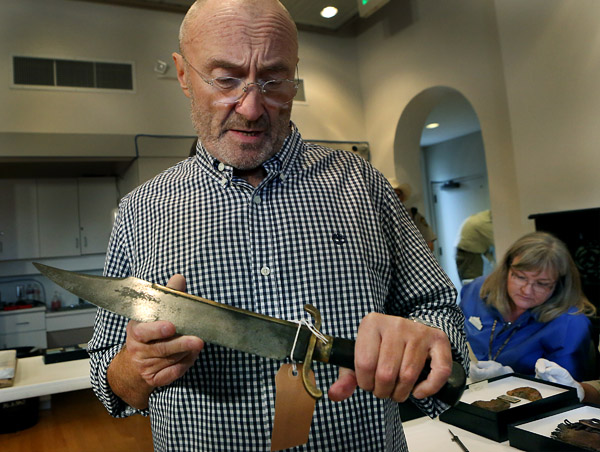 Phil Collins holds one of the artifacts related to the Battle of the Alamo, which he handed over to the state of Texas on Tuesday in San Antonio. [AP/NEWSIS]

SAN ANTONIO, Texas - British pop star Phil Collins on Tuesday handed over his vast collection of artifacts related to the Battle of the Alamo and the Texas Revolution to the state of Texas.

Collins was in San Antonio to donate what’s considered the world’s largest private collection of Alamo artifacts. It includes a fringed leather pouch and a gun used by Davy Crockett, Jim Bowie’s legendary knife and letters from garrison commander William B. Travis.

“There’s things in there that will make your mouth drop,’’ Collins said.

The 1980s pop artist and Genesis singer-drummer has joked that he spent all the money he made from music on artifacts related to the 1836 battle in which 1,500 Mexican troops laid siege to 200 Texans.

The collection was given to Texas Land Commissioner Jerry Patterson, the state steward of the Alamo who is pushing for a new historical center that would house Collins’s collection.

“Texans are deeply indebted to Phil Collins,’’ Patterson said. “He is giving us back our heritage. Now these Texas treasures need a home where all can see them and study from them and learn about how Texans won our liberty.’’

Collins, who’s a Grammy and Academy Award winner, donated a collection of more than 200 items for display. Five crates full of artifacts were unloaded from a cargo truck Tuesday.

“This completes the journey for me. I’m 64. When I was 5 or 6 years old, this thing began,’’ Collins said of his fascination with the Alamo. “My 9-year-old son was saying, ‘Why are you going to give it all away, dad? I thought I was going to have it,’’’ he said with a laugh.

Patterson said it will likely take at least five years to raise the millions of dollars needed to design and build a center to house the collection. The location of the center will be decided in about two weeks, Patterson said, and will likely charge for admission. The 4.2-acre Alamo grounds are free to the public.

“This collection is coming home and it’s going to be very interesting for people to come and see and learn,’’ Collins said. “And this is what it’s all about.” AP