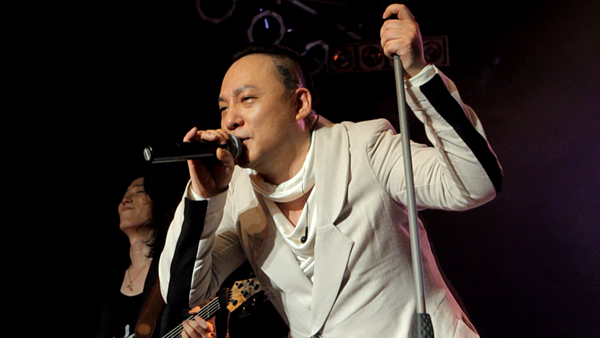 A recent photo of Shin Hae-chul from when he came back to the music scene with his mini-album “Reboot Myself” in June.

Musician Shin Hae-chul, often dubbed “mawang,” or the king of demons, died Monday around 8 p.m., five days after suffering from cardiac arrest and losing consciousness. He was 46.

Shin, who has been active in the music scene as a singer, producer and singer-songwriter over the past 26 years, was one of the biggest names in Korean music history, with more than 30 studio albums to his name.

Shin and his group Muhangwedo debuted in 1988 on TV in the annual singing competition hosted by MBC, winning the grand prize with the rock song “To You.” Shin, who was a college sophomore at the time, wrote and composed the song.

“To You” became quite a sensation in the Korean music scene because the industry was heavily dominated by either ballads or dance music back then. 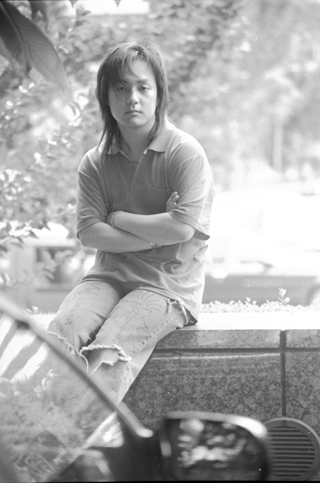 An undated photo of Shin from when he was in his 30s. [JoongAng Ilbo]

More than 20 years have passed since the release of “To You,” but its popularity hasn’t waned, especially among college students who use it as a cheerleading song.

After Muhangwedo, Shin performed as the lead vocalist for the rock group N.EX.T.

The versatile entertainer carved out a name for himself in rock but did not limit himself to just one genre. He dabbled in various styles of music, including techno and jazz.

Shin’s recent mini-album, released in June, is an example of this. The title track of the album, “Reboot Myself,” is a one-man a cappella song spanning five genres, including neo soul, funk, post-disco, Latin and jazz.

“Shin has lived his entire life as an experimental musician,” music critic Song Gi-cheol told the JoongAng Ilbo, an affiliate of the Korea JoongAng Daily.

“By doing so, he took Korean music to the next level. His straightforward and tongue-biting words were sometimes a torment to himself, but he walked his own way.”

The musician was involved in several fields other than music.

On and off, Shin hosted a radio show called “Ghost Station” from 2001 to 2012, which is where he earned his long-time nicknames mawang and gyoju.

“Gyoju” means “religious sect leader,” a name given to Shin for his charismatic and avant-garde personality.

While working as a musician and producer, Shin has never been involved in a plagiarism scandal.

Rather, British heavy metal band Judas Priest came under fire for copying two of Shin’s songs, “Machine Messiah” and “Demo.69,” from his 1999 album “Monocrom.” The band was accused of using the tracks to create “Metal Messiah.”

Shin also holds the copyright to the famous daehanminguk chant from the 2002 Korea-Japan World Cup.

But the singer hasn’t always been adored. His straightforward commentary on various social issues was sometimes considered controversial by the public.

When Shin appeared on a TV debate show as a guest in 2008, he said that the Korean government should legalize marijuana - which is highly taboo in Korea - and scrap the adultery law.

He wasn’t afraid to reveal his political ideology, either. Shin publicly supported then-presidential candidate Roh Moo-hyun before the 2002 election.

In 2003, the singer held a one-man demonstration in opposition of the government’s decision to dispatch troops to the Iraq War.

He also included his thoughts about society in his lyrics and often touched upon issues regarding religion, politics, generation gaps, the homeless and red-light districts.

But in real life, Shin was a romantic. When he discovered his girlfriend was suffering from cancer, he proposed to her and they got married.

Some of Shin’s biggest hits include “To You,” “Don’t Say Goodbye” and “Jazz Cafe.”

According to staff at Asan Medical Center, where Shin was being treated in the intensive care unit, the direct cause of his death was cerebral hypoxia, a condition that restricts oxygen from reaching the brain.

Shin is survived by his wife, Yun Won-hee, and two children.

His family was at his side when he passed away.

The musician’s memorial altar is No. 23 at Asan Funeral Hall in Pungnap-dong, southeastern Seoul.