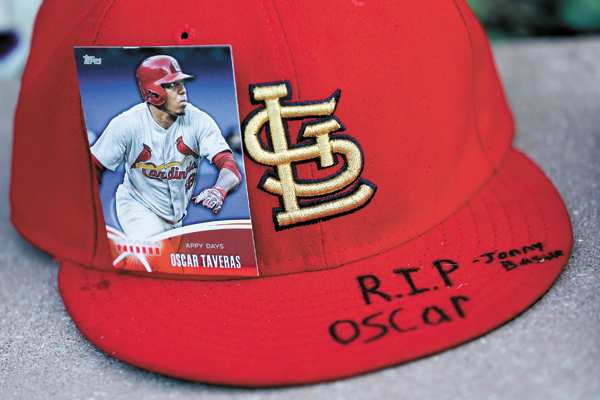 A baseball card of Oscar Taveras of the St. Louis Cardinals is part of a makeshift memorial Monday outside Busch Stadium. [AP/NEWSIS]

Mike Matheny needed some time to figure out what to say. Like the rest of the St. Louis Cardinals, the manager was leveled by the sudden death of Oscar Taveras.

The Cardinals are grieving the loss of an active player for the third time in 12 years, after the 22-year-old Taveras died Sunday in a car crash in the Dominican Republic. Matheny, General Manager John Mozeliak and pitcher Carlos Martinez were part of a group from the organization that plans to attend a private burial service Tuesday.

“I was asked last night to give some words regarding the tragic death of Oscar Taveras, but I just simply couldn’t,’’ Matheny said Monday in a statement. “To say this is a horrible loss of a life ended too soon would be an understatement.’’

Taveras was a teenager when he signed with St. Louis as an international free agent in 2008. He was regarded as one of baseball’s top prospects and homered in his major league debut May 31. He also had a big solo drive in the seventh inning of Game 2 in the NL Championship Series against San Francisco.

“He was someone who became an identity of our organization to some degree,’’ Mozeliak said Monday night. “When you think about how much has been written about him and how much he has been talked about, he never truly got a chance to show it at the major league level.’’

Mozeliak said he took a connecting flight from Miami with Taveras’ father.

“Clearly, he was shaken by these events,’’ the GM said.

Taveras was driving a 2014 Chevrolet Camaro at the time of the accident on a highway between the beaches of Sosua and Cabarete in Puerto Plata, about 215 miles north of the capital of Santo Domingo. Edilia Arvelo, Taveras’ 18-year-old girlfriend, also died in the crash.

A funeral for Arvelo was held Monday.

Highway police spokesman Col. Diego Pesqueira said the road was wet from recent rain, but the cause of the crash is under investigation.

Moises Rodriguez, the international scouting director for the Cardinals, called Mozeliak with the news Sunday night.

“My very first thought was, ‘Is this true? Is this possible?’’’ said Mozeliak.

The Cardinals had just finalized plans for Taveras to spend most of November at the team’s spring training facility in Florida, and then head to the Dominican Winter League. Taveras lost the regular right field job to fellow rookie Randal Grichuk, but that did not diminish the organization’s long-term view that he could be a star.

Taveras hit .239 with three homers and 22 RBIs in 80 games in his only season in the majors.

“In my opinion, the word ‘love’ is the most misused and misunderstood word in the English language. It is not popular for men to use this word, and even less popular for athletes,’’ said Matheny. “But there is not a more accurate word for how a group of men share a deep and genuine concern for each other. We loved Oscar, and he loved us. That is what a team does, that is what a family does. You will be missed, Oscar.’’

Matheny was a catcher for the Cardinals when pitcher Darryl Kile died of a heart problem in June 2002. St. Louis also lost Josh Hancock in a fatal car crash in April 2007.

Each of those deaths occurred during the season, but the accident for Taveras happened with his teammates at home after losing to San Francisco in the NL Championship Series. AP