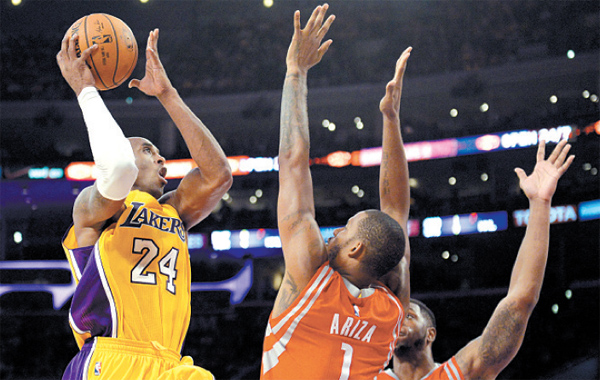 Lakers guard Kobe Bryant (24) drives to the basket against Rockets guard Trevor Ariza (1) during the second half Tuesday at Staples Center. [USA TODAY/NEWS1]

After Lakers rookie Julius Randle left his NBA debut strapped to a wheeled stretcher with a broken right leg, every player at Staples Center gained a sober perspective on the season opener.

Even ex-teammates Kobe Bryant and Dwight Howard realized their shouting match was particularly inconsequential in the final minutes of the Houston Rockets’ blowout win.

James Harden scored 32 points, Howard added 13 points and 11 rebounds before getting into an exchange with Bryant, and the Rockets spoiled Bryant’s return to the Lakers with a 108-90 victory on Tuesday night, local time.

Bryant’s comeback game and the Lakers’ return from a 55-loss season went from bad to miserable when Randle broke his right leg in the fourth quarter. The seventh overall pick out of Kentucky collided with two Rockets under the basket and landed awkwardly, collapsing to the court in agony.

“The last three or four minutes, obviously we weren’t thinking a whole lot about basketball,’’ Scott added. “We were just thinking about Julius, and hoping he’s OK.’’

Randle’s injury cast a pall over the night for the Lakers, who were banking on the 19-year-old power forward to become a solid player - perhaps their next star. His right leg was immobilized before his teammates lifted him onto the stretcher, obvious pain on his face, with Bryant squeezing his hand.

“We’ll help him through this, and he’ll come back a better basketball player,’’ Bryant said. “That’s the goal, to try to find a silver lining in this. He’ll use the time to come back and be stronger.’’

Bryant scored 19 points in his first game back at Staples Center after missing most of the Lakers’ worst season in a half-century with two major injuries.

A few moments before Randle’s injury, Howard and Bryant received matching technical fouls when Howard elbowed Bryant in the face after grabbing, setting off a lengthy stretch of shouting and finger-pointing between the former teammates.

Although teammates stepped between them, Bryant appeared to yell “Try me!’’ at Howard, who wore his usual broad grin while responding.

Howard spurned Bryant and the Lakers after one season in 2013 to take roughly $30 million less as a free agent in Houston. AP