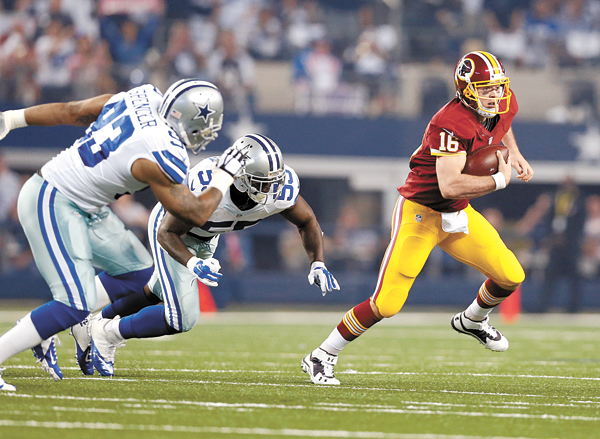 Colt McCoy did it again. The small-town West Texas kid calmly led a winning drive at the home of the Dallas Cowboys.

McCoy directed Washington to Kai Forbath’s 40-yard field goal in overtime and Dallas was unable to answer after Romo came back from an injury to his surgically repaired back, sending the Redskins to a 20-17 victory on Monday night that snapped the Cowboys’ six-game winning streak.

Playing in Dallas’ stadium for the first time since his Texas-record 45th victory in the 2009 Big 12 Championship Game against Nebraska on a last-play field goal, McCoy won in his first NFL start in nearly three years after beginning the night with a career record of 6-15.

“Last-second wins, right?’’ McCoy said, laughing. “But I grew up as the game went on. I felt more and more comfortable and I started seeing the defense right. We made some plays down the stretch that good teams have to make to win games.’’

It might be McCoy’s only start if Robert Griffin III is ready to return from a dislocated ankle that has sidelined him since Week 2. The Redskins go to Minnesota on Sunday and then have their bye week.

“Robert’s our starter,’’ said Coach Jay Gruden. “I haven’t wavered off of that in my mind.’’

The Cowboys (6-2) had one last chance after Forbath’s kick, but couldn’t get a first down. Romo’s final pass on fourth down was knocked away by Bashaud Breeland.

Dallas running back DeMarco Murray extended the record he took from Jim Brown a week ago with his eighth straight 100-yard rushing game to start the season. He had 141 yards rushing and 80 receiving, but also his fifth fumble of the season at the end of a 36-yard screen pass inside the Washington 10 in the first half.

Romo left after getting sacked by Keenan Robinson in the third quarter. He lay motionless for several minutes, but returned for the final Dallas drive of regulation.

The Redskins had lost eight division games in a row and their last seven games in prime time.

McCoy, who was 25 of 30 for 299 yards, threw 23 yards to Pierre Garcon to get the winning drive going. On third-and-3 from midfield, he fled the pocket, pointed to Jordan Reed to run up the field and lofted a pass that Reed caught while tiptoeing inbounds.