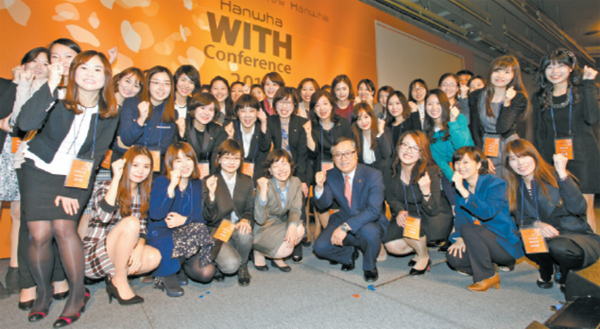 Participants of the Women in Tomorrow Hanwha conference, held by Hanwha Group to encourage strong female leaders, gather yesterday at the Plaza Hotel in Jung District, central Seoul. Provided by the company

Hanwha Group held a conference yesterday to create a women-friendly working environment for their female employees.

At Women in Tomorrow Hanwha, or WITH, about 300 female employees from the company and executives including Hanwha Life Insurance CEO Kim Yun-bae gathered at the Plaza Hotel in Jung District, central Seoul, to discuss the company’s visions and develop stronger leaders among its female staff. It was the first time the company held a conference exclusively for female employees.

Employees at the company’s operations in Ulsan and Yeosu, South Jeolla, also attended the conference in Seoul.

“I strongly believe that our female workers who are sitting in front of me will lead the future of Hanwha,” Hanwha Life CEO Kim said. “I think those characteristics - that only female workers have such as strong mothers’ spirit - will contribute to the company greatly.”

Hanwha said that it started a program in September last year to create a better environment for its female workers. It includes allowing female employees a long maternity leave and helping them continue their career even after having a child. It also does not require female employees who are raising an infant of less than a year old to work overtime.

According to Hanwha Group, more than 50 employees of Hanwha Hotels and Resorts and its retail business Galleria have started working more flexible hours since the program started. The ratio of female employees at these two affiliates is relatively higher than at Hanwha’s other affiliates.

The conglomerate also said it has opened seven day care centers at its operations in Seoul and Yeosu and at its headquarters in Janggyo-dong, central Seoul. Hanwha has designated an exclusive area for breast-feeding and a rest area for pregnant employees.

“I felt no burden in taking a one-month leave from work to help my first born as he started attending elementary school in March,” said Kim Ae-gyeong, a Galleria employee. “Also, as I was allowed to start my work at 10 a.m., it allowed me to personally drop off my younger child to the day care center in the morning.”

Because of its plan for female employees, Hanwha’s eight affiliates were recognized this year by the Ministry of Gender Equality and Family for being family friendly.