Renault Samsung, workers on a roll

Renault Samsung, workers on a roll 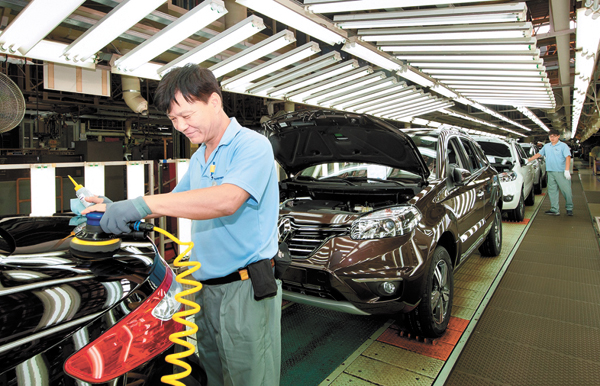 A Renault Samsung employee works on the assembly line in Busan earlier this month. The company has added an hour to daily shifts and some weekend shifts in response to rising sales. Provided by the company


Most workers would be eager to rush out of the office when it’s time to punch out so they won’t miss an inning of the KBO postseason series between two Seoul rivals, the LG Twins and Nexen Heroes. But not workers at the Renault Samsung Motors (RSM) factory in Busan.

Even at 5 p.m. on Monday, the 7a.m. to 4 p.m. day-shift workers look as if they wouldn’t mind staying late even if they weren’t getting overtime pay.

“More working hours means the company is stabilizing and performing well in the industry,” said one worker. “I’m not tired at all. I want this [extra work] to continue as long as it can.”

There are two eight-hour shifts. The employees said this month they have been getting an hour of overtime every day and extra shifts on Sundays and some holidays.

The additional work and pay is the result of recent upswings in sales. Last month, the automaker sold 16,484 units - 5,954 in Korea. That is a year-on-year increase of 47.1 percent and the highest monthly sales RSM has seen since 16,987 units were sold in February 2012.

With growing sales, the factory has extended each shift by an hour for the first time in 11 months.

This month, the company expects production to exceed 22,000 units. If so, it would be the largest monthly production in three years.

“We decided to resume the extra working hours this month, since output has doubled compared to a year ago after we introduced several new models,” said Oh Jik-ryeol, chief of manufacturing.

RSM’s most popular model this year is its QM3 compact utility vehicle (CUV).

In just seven minutes after the company started taking pre-orders in January, the CUV sold 1,000 units. In the first nine months of the year, 9,923 units of the QM3 were sold.

Industry insiders say the vehicle’s modern design and fuel economy of 18.5 kilometers per liter (43.5 miles per gallon) appeals to drivers in their 20s and 30s.

Meanwhile, sales of the QM5 Neo, an SUV also introduced in January, doubled in the past nine months, the company said.

But competition is expected to heat up as Hyundai Motor, the dominant automaker in the local market, is set to introduce its latest sedan, the Aslan, tomorrow.

Yet RSM is confident the SM7 Nova can maintain its edge by attracting tech savvy consumers. The sedan is equipped with a “smart mirroring” system that integrates with smartphones to provide a variety of information, including a navigation system, a music and a video feed. Additionally, RSM is the first local automaker to use Wi-Fi to connect smartphones with the car’s infotainment system. Others use Bluetooth.

The automaker said the monthly sales goal for the SM7 Nova is 800 units.