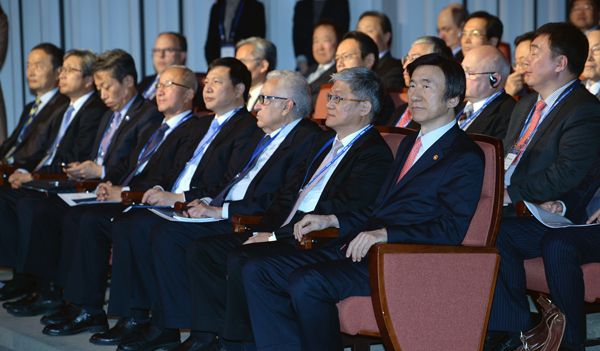 
South Korea’s top nuclear envoy left for China yesterday for a meeting with his Chinese counterpart to discuss North Korea’s nuclear arms program and efforts to restart stalled talks on it.

Ahead of his meeting with Wu, Hwang will visit Shenyang and attend a forum hosted by the Korean Consulate General in that city. Following the forum, he will visit the city of Dandong, which is on the North Korean border.

Hwang’s visit coincides with a meeting of senior diplomats in Korea to address the North Korean issue. On the sidelines of the Northeast Asia Peace and Cooperation Forum, senior foreign affairs officials from the South, China, Japan, Russia and the United States sat down for talks at Seoul’s foreign ministry.

The vision, also known as the “Seoul Process,” was intended to engage major players in Northeast Asia through nonpolitical, multilateral cooperative initiatives to build up trust.

Nuclear safety, energy security and cyberspace were topics addressed at the three-day forum.

The South Korean government had sent an invitation to North Korea to attend the forum, but Pyongyang rejected the offer.

Through its state-run Korean Central News Agency, the North said the initiative was a joint effort by Seoul and Washington to force Pyongyang to give up its nuclear arms and absorb the country into the South, and the forum was part of the scheme.

While calling Park’s initiative an unrealistic approach mimicking the model of Europe, the North said last week that the key to peace in Northeast Asia was ending the hostility between the North and the United States.

While the North was a no-show, 60 government officials and scholars from the United States, China, Japan, Russia and Mongolia attended the forum, as well as representatives of international organizations including the United Nations and the European Union. NATO Deputy Secretary General Ambassador Alexander Vershbow was among the participants.