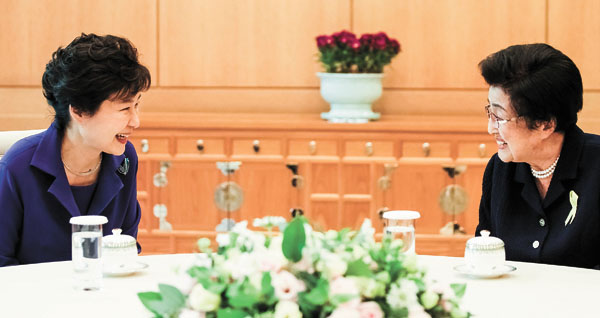 President Park Geun-hye, left, receives Lee Hee-ho, widow of former President Kim Dae-jung, as a guest yesterday at the Blue House. Their meeting was the first since President Park was inaugurated on Feb. 25, 2013. Lee sent a wreath to Seoul National Cemetery to commemorate the 35th anniversary of the death of former President Park Chung Hee, Park’s father, on Oct. 26, the first time she had done so. Park Chung Hee and Kim Dae-jung were political nemeses. Lee asked Park during the dialogue to allow her to visit North Korea, and Park replied that she will look for a convenient opportunity. [Joint Press Corps]