Councilman gets life term for murder

Councilman gets life term for murder 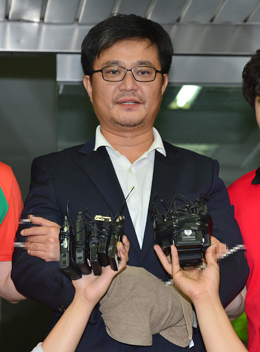 The Seoul Southern District Court yesterday sentenced a member of the Seoul municipal council to life in prison for inciting the murder of a wealthy businessman to whom he owed millions of won.

Councilman Kim Hyung-sik was convicted by the court for making arrangements for his longtime friend to kill the Seoul businessman, surnamed Song.

The judgment was made on the last day of the week-long trial, with jurors delivering a unanimous guilty verdict that was upheld by the judge. In Korea, a jury’s decision is nonbinding and a judge may overrule it.

The prosecution had initially demanded the death penalty.

“Under the mask of a noble councilman, Kim received a bribe and used his friend to murder Song in an attempt to commit the perfect crime,” the prosecution stated at the trial. “We have to show the strictness of the law so that justice can be realized.”

The councilman was arrested in June and charged by police for instigating his friend, surnamed Paeng, to carry out the killing in the early morning of March 3 in a residential building in Naebalsan-dong, Gangseo District, southwestern Seoul.

According to the police investigation, Kim received 520 million won ($495,450) in kickbacks and free alcohol from Song between October 2010 and December 2011, on the promise that the councilman would use his influence to remodel the Balsan Station area in Gangseo District from a residential area into a new business complex.

The 67-year-old businessman intended to expand his building in the area for his tourist hotel business.

When Kim failed to deliver on his promise, Song grew impatient and threatened to expose the deal ahead of this year’s June 4 local elections, in which the councilman ran as a candidate for the main opposition New Politics Alliance for Democracy and was reelected to his seat.

According to prosecutors, Kim started planning the murder in 2012, fearing that his political career would come to an end.

Paeng, who owed the councilman 70 million won, agreed to kill the businessman on the condition that his debts be cleared.

He later confessed to the contract killing after Kim continually urged him amid the investigation to commit suicide.

Later in its investigation, the prosecution uncovered a personal financial ledger believed to have been written by the victim. Kim’s name reportedly appeared 20 times in the record.