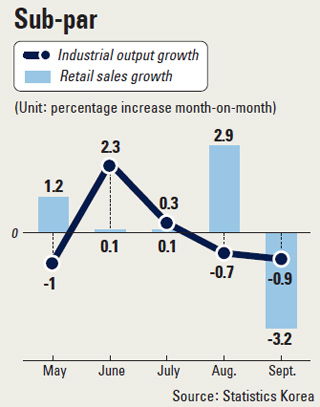 Now that the U.S. Federal Reserve has announced the end of the unprecedented asset-purchase program that propped up the global economy for the past six years, concerns are growing about the impact it will have on the Korean economy and its financial market.

The government maintains a staunch stance that there won’t be much effect, as the economy has strong fundamentals and the Fed’s decision was expected.

“Since the Federal Open Market Committee’s decision was within market expectations, the effect on the local foreign currency and financial markets will be limited,” the Ministry of Strategy and Finance said in a statement after a meeting of high-ranking financial policymakers in Seoul yesterday. “The FOMC’s decision confirms that the U.S. economy is on a recovery path.”

However, Finance Minister Choi Kyung-hwan mentioned in a separate ministerial meeting that volatility is increasing in international financial markets, and the pace of recovery of the domestic economy is still weak.

“Due to different directions of monetary policies in advanced countries, there is concern that international financial volatility may grow,” Choi said. “The country’s monthly industrial production and domestic consumption are still sluggish, while even exports seem to be retreating.”

The minister said conditions for Korea’s exports have become tougher due to slowdowns in the eurozone and China and the weakening of the yen.

According to a report by Statistics Korea yesterday, total industrial output dropped 0.9 percent in September from a month earlier, falling for the second consecutive month, despite the government’s all-out stimulus measures.

Retail sales, an index of private consumption, plunged 3.2 percent compared to the previous month during the same period, the largest decrease in three years and seven months.

Such poor performances came despite fervid efforts by Minister Choi and his economic team to boost the economy.

The U.S. Fed’s decision is likely to affect Korean financial markets in the coming months.

Although the Fed said it will keep its benchmark interest rate between 0 to 0.25 percent “for a considerable time,” the end of U.S. quantitative easing means that the global funds that flocked to emerging markets over the past six years could return to the U.S. market.

Fed Chairwoman Janet Yellen is completing two years of bond purchases that started under predecessor Ben Bernanke as the Fed nears its goal for economic growth and employment. She must now chart a course toward the first interest-rate increase since 2006.

The FOMC repeated it will consider a wide range of information in deciding when to raise the federal funds rate, which has been held near zero since December 2008. Most Fed officials expect to see the rate raised next year, according to projections released last month.

The Fed said rates could rise sooner than currently anticipated if it makes faster progress toward its goals of full employment and stable prices.

“Conversely, if progress proves slower than expected, then increases in the target range are likely to occur later than currently anticipated,” it said.

If the Fed raises its key rate earlier than expected, the impact on emerging markets will be greater.

The Korean financial market has been experiencing increasing instability over the last three months because of fickle foreign investors. Earlier this month, the Kospi kept tumbling and even broke the 1,900 mark during trading on Oct. 17 due to increased uncertainties triggered by weak indicators in the United States, Europe and China.

It was the exact opposite of Minister Choi’s remark that “there will be no rapid capital outflow even in the case of an early U.S. rate hike.”

On the news of the end of the U.S. bond-buying program, the benchmark Kospi yesterday opened lower and finished at 1,958.93, down 2.24 points, or 0.11 percent, from the previous day.