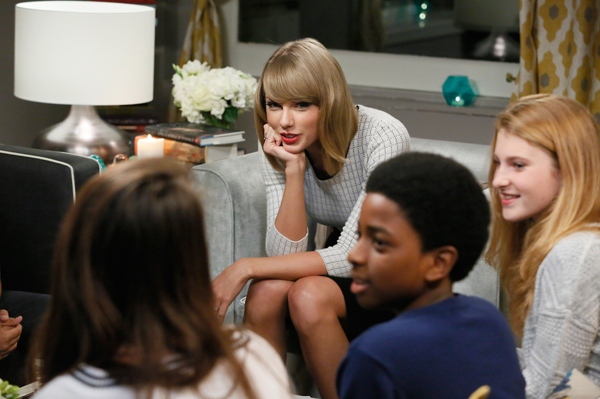 Singer Taylor Swift talks with New York City public school children about the power of reading and writing at an exclusive recording for Scholastic’s “Open a World of Possible,” at Scholastic’s headquarters in New York on Tuesday. [AP/NEWSIS]

The superstar made a stop Tuesday night on her busy tour promoting her new album to share her passion for reading and writing with a gaggle of New York City public school kids - and 100 more giggling on computer screens via Skype from classrooms in Michigan and California.

Swift, whose “1989” was expected to debut at No. 1 next week, is a lifelong lover of books and writing, particularly songwriting, but she told The Associated Press after chatting with the tweens and teens at Scholastic that she isn’t ruling out other writing projects.

She’s already an unpublished novelist! At 13 or 14, she wrote a 400-page book based on her life and friends, whom she had left behind during a summer away with her family.

“But since then, I’ve discovered music and that’s the form of writing that inspires me the most. It’s not to say that I wouldn’t expand the mediums and the ways that I choose to write,” Swift said. “What if I end up writing a script or a book, or a book of poetry or something? That would be so amazing. I would love to see that happen.”

Her meetup with the kids, six surrounding her on cozy couches at the book publisher’s Soho headquarters, was turned into a 30-minute video available at Scholastic.com that has her urging more young people to “open a world of possible” through books.

The students on Skype from Troy, Michigan, and Poway, California, had made signs declaring the superstar awesome. The in-person New Yorkers offered Swift their book recommendations. Among them: “The Glass Castle” by Jeannette Walls and “Out of My Mind” by Sharon Draper.

The book ideas were timely for Swift as she prepares for a few lengthy flights. Making and promoting her fifth album has left her out of the loop on what to read, she said.

“I definitely walked away with a few suggestions, which I appreciate because with the way the schedule’s been it’s kind of lower priority and it shouldn’t be,” Swift said.

And while now, at 24, she feels like the older sister or a kindly aunt to kids she has spent time with at Scholastic for several years, she has never forgotten what got her interested in books at their age.

On Wednesday, Swift announced she will donate her portion of proceeds from the album’s single “Welcome to New York” to New York City public schools. The song was co-written by Ryan Tedder of OneRepublic.