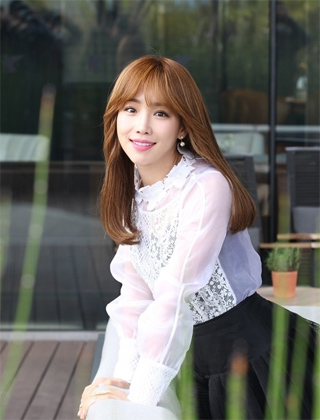 One of the most talked-about television actresses these days is Lee Yoo-ri.

The star, who played the villain in the recent drama “Jang Bo Ri Is Here,” has not received so much public attention throughout her 13-year career as right now.

Her popularity can be attributed to Yeon Min-jung, a character from Lee’s last production who is not afraid to harass or hurt others to achieve success. Although this led to early criticism that Min-jung is unrealistic, reviews of the role changed toward the end of the drama’s run. Whenever Min-jung yelled, shouted and schemed, viewership rates skyrocketed. Love for the character translated into more popularity for Lee, and many people said they started to watch the series because of her acting skills.

“The attention and popularity was stressful and scared me,” Lee said in an interview with Ilgan Sports, an affiliate of the Korea JoongAng Daily.

“I have so many more things I want to try and I don’t want to have fleeting fame and be forgotten sooner.”

Q. How does it feel to be done with the drama?

A. I’m sad that I can’t be Min-jung anymore. But at the same time I’m delighted that I’m much busier thanks to the character. I was doing interviews right after the drama ended as if I were a top star - because that’s what top stars do. I’m amazed every day.

Do you feel that you have become more popular?

I do. Fans make short videos [about me] on social media and I’m very thankful for that. I feel like I should put everything together and make an album. When will I receive such love again? I want to keep them all.

Do you worry that you’ll become arrogant?

I don’t like such things [celebrities becoming arrogant after getting famous]. I sometimes run into people during filming who recognize me. When I see that they are hesitant to approach me, I approach them and ask if they want a photo with me. Who knows, they might regret not having approached me later that day. I had a similar experience when I saw T.O.P. of boy group Big Bang and I wanted a photo with him but didn’t dare talk to him.

Does Min-jung still have a special place in your heart?

I’ve tried to leave her behind, but people still look for her when they meet me. Many people who interview me come prepared with a sentence so that they can videotape me saying it. That makes it much harder for me to forget the character.

But on the other hand, because I was loved so much because of her, I don’t necessarily feel the need to leave her behind. As a person who was rarely recognized before, I’m truly delighted that I have created a character that has given me a sense of existence.

Was there a character you studied for inspiration before you acted as Min-jung?

Before I started filming, I studied many works by foreign stars, especially villains played by male actors.

Didn’t acting as a villain tire you out physically and mentally?

No matter how hard it was, I wanted to do it for longer. I felt regretful [when scenes] were cut short. Because we always had too many scenes filmed, sometimes lots of my lines were pre-edited. But I was also relieved when I saw that scenes I thought I didn’t do well in got cut.

How did you push yourself to keep moving during filming?

I never got tired because Min-jung was someone who couldn’t lose to anyone or be pushed over. That made me more excited to film scenes.

Your part kept on increasing in the drama. How did you feel about that?

I just did what I had to do. Whether I play a leading role or a supporting character, I try to do my best. I don’t think that how many scenes you have in a series is so important. I’m just thankful to the writer and director for giving me more of an opportunity.

How has this drama changed your life?

I think my experience in this drama will give me more variety and opportunities. I understand the name of the character will be forgotten sometime later, but it’s meaningful that the name of a character I played was the talk of the town for a while.

What type of work do you want to do next?