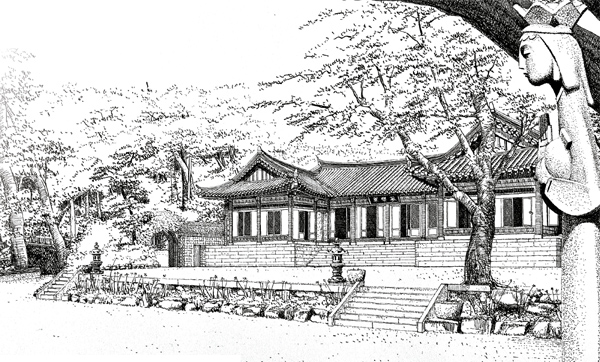 A sketch of Gilsang Temple in Seongbuk-dong. By Ahn Choong-gi

Seongbuk-dong, nestled in a hilly part of northern Seoul, is known for its tranquil and historical atmosphere.

The neighborhood is dotted with hanok (traditional Korean houses) and has a limited number of commercial shops, which is one of the reasons people tend to visit it for a laid-back stroll in good weather.

Three sides of the locale are surrounded by Bukak Mountain and the Seoul Fortress Wall, which shield the area from the hustle and bustle of the city.

Visitors have to walk for at least 20 minutes to find the nearest subway station - Hansung University on line No. 4 - which rarely happens in a city like Seoul where public transportation gets you pretty much everywhere.

But although it has built up a reputation for its unique ambiance, not many people are aware that this peaceful place was home to many artists and members of the literati during the Joseon Dynasty (1392-1910) and colonial times, when countless literary and artistic pieces were developed.

One of the most meaningful legacies preserved in Seongbuk-dong is Hunminjeongeum Haeryebon (National Treasure No. 70), which Chun Hyung-pil (1906-1962), the founder of Kansong Art Museum, kept hidden from Japanese authorities from 1940 to 1946 when Korea was under the country’s colonial rule.

At the time, the 33 scholars who contributed to creating Hangul, the Korean alphabet, were in jail or had passed away.

When Hunminjeongeum Haeryebon, which details the creation of Hangul and its philosophical background, was unveiled to the world in 1946, the belief that the alphabet was an imitation of ancient lettering was debunked.

“If it weren’t for the Haeryebon, we wouldn’t have been able to understand the value of Hangul half as much as we do today,” said Kim Jong-taek, the head of the Korean Language Society, a Hangul research association based in Seoul.

“The designation of Hangul Day on Oct. 9 originates from the Haeryebon, which said in its preface that it was published on Oct. 9, 1446,” Kim added.

Around the same time, other members of the local literary scene, as well as artists, moved into the academic neighborhood. The new residents included famous poet and reformist Han Yong-un (1897-1944) and novelist Lee Tae-jun.

The hanok where Lee lived in his later years and published many of his short novels is called Suyeonsanbang, which literally means “a hermitage in the mountain where literati gather” in Chinese.

Even when the colonial era neared its end, writers and artists’ adoration of Seongbuk-dong did not subside. It remained the main stage for the development of modernist literature from writers like Lee Hyo-seok and Jeong Ji-yong.

When Kim Whan-ki, a renowned painter who lived in the area, was asked to describe it, he said the place is “full of forests, autumn foliage and birds chirping.”

Jung Mi-sook, the head of the Korea Furniture Museum in Seongbuk-dong, said “There is not a single decent supermarket where you can buy groceries.”

Resident Park Jong-un said “it’s inconvenient to walk around because of so many hills.”

And poet Jang Seok-nam, who has been living in the neighborhood for 15 years, said that “the panoramic view that the Fortress Wall of Seoul provides is beyond expression.”

The neighborhood has also provided a setting for stories and urban legends. In the 1960s, poet Kim Kwang-sub and painter Kim Whan-ki were said to provide inspiration to one another when they both lived in the locale.

One day, Kim published a poem that included the words “Where, in What Form, Shall We Meet Again?” Later, Kim Whan-ki presented an abstract painting that was named after the phrase.

A famous love story describes how poet Baek Seok and the gisaeng (female courtesan) Jaya resided in the neighborhood at one of its landmarks, Gilsang Temple. Jaya whose real name was Kim Yeong-han, used to own Gilsang Temple and used it as a high-end entertainment venue for politicians from the 1960s to 1980s. When Jaya parted with Baek, she mourned over their sad fate and donated the property - which was worth 100 billion won ($94 million) in today’s currency - to a monk.

“When I take my students here, they are surprised to see how much unknown and valuable attractions exist in the area,” said poet Jang Seok-nam.

“Looking at the places and hearing the stories is a much better way to learn the world than just sit in the classroom and read books.”

“There are still many more unexcavated treasures here,” said Professor Kim Myung-seok. “I feel awful that there is not a single gravestone in Park Tae-won’s and Yoon Yi-sang’s old residences.”

Get off at Hansung Univ., line No. 4, exit 6 and take village bus Nos. 1111 or 2112, or the shuttle bus provided by Gilsang Temple. If you are interested in Course A, as suggested by the JoongAng Ilbo (below), take the village buses. If you are interested in Course B, take the shuttle bus. Reaching Shimwoojang, Han Yong-un’s old residence, and Gilsang Temple is difficult because they are both located high in the hills of Seongbuk-dong, so public transport is recommended.