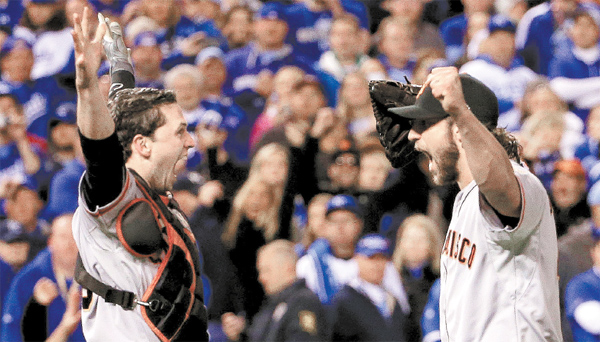 Madison Bumgarner pitched five innings of near-perfect relief as the San Francisco Giants succeeded where no team had in 3 1/2 decades, winning Game 7 on the road to claim their third World Series title in five years.

Punctuating one of the finest October performances in baseball history, Bumgarner came out of the bullpen to pitch five scoreless innings on two days’ rest, helping the Giants hold off the Kansas City Royals, 3-2, Wednesday night in a championship pushed to the limit.

A two-out misplay in the ninth almost wrecked it for Bumgarner and the Giants. He had retired 14 in a row when Alex Gordon’s single fell in front of center fielder Gregor Blanco, who let the ball get past him for an error that allowed Gordon to reach third.

Left fielder Juan Perez ran back to the wall and retrieved the ball in time to hold Gordon at third.

Bumgarner retired Salvador Perez on a foul popup to third baseman Pablo Sandoval for the final out. The big left-hander was immediately embraced by catcher Buster Posey, and the rest of the Giants rushed to the mound to join the victory party.

Three days after throwing 117 pitches in a four-hit shutout to win Game 5, Bumgarner threw 68 more and dropped his record-low career Series ERA to a barely visible 0.25.

The win went to to Jeremy Affeldt, and Bumgarner got the save.

Regardless, he etched his place in postseason lore among the likes of Christy Mathewson, Babe Ruth, Sandy Koufax, Bob Gibson, Reggie Jackson, Randy Johnson and Curt Schilling - players who delivered indelible October performances to lead their teams to titles.

Posey expected Bumgarner to throw three innings, then turn over the game to setup man Sergio Romo and closer Santiago Casilla, who threw four pitches in the entire Series.

Michael Morse put the Giants ahead for good with a single in the fourth, and the Giants eked out a battle of the bullpens on a night when both starting pitchers made unusually quick exits.

The Giants were dubbed a “Band of Misfits’’ in 2010 when they beat Texas to win the franchise’s first title since 1954 in New York. Two years later, they swept Detroit for another championship.

And this time, they became the second NL team with three titles in a five-year span, matching Stan Musial’s St. Louis Cardinals of 1942-46.

Both managers promised quick hooks if their starters showed the slightest signs of faltering, and both managers delivered as Tim Hudson and Jeremy Guthrie combined for 15 outs - matching the fewest by Game 7 starters. Hudson, at 39 the oldest Game 7 starter, allowed two runs in 1 2-3 innings. The 35-year-old Guthrie took the loss, giving up three runs in 3 1-3 innings

Affeldt followed Hudson with 2 1-3 innings of scoreless relief in his longest outing since July 2012, getting help from the first successful replay challenge in World Series history.

Bumgarner entered to boos in the bottom of the fifth. He gave up an opposite-field single to the first batter, Omar Infante, who advanced on a sacrifice. Bumgarner retired Nori Aoki on a liner near the left-field line that was grabbed by Perez, starting over Travis Ishikawa because of his defense. Bumgarner then struck out Lorenzo Cain.

He retired the side in order in the sixth, seventh and eighth, increasing his pitch count to 52. With loud chants of “Let’s Go Royals!’’ echoing through Kauffman Stadium, he struck out Eric Hosmer to open the ninth, then retired Billy Butler on a foulout to bring up Gordon.

The 25-year-old Bumgarner allowed two hits, struck out four and walked none. He pitched 52 2-3 postseason innings.

Voted the Series MVP, MadBum became king from Nob Hill to North Beach, from The Marina to The Mission, as San Francisco celebrated another title won by Kung Fu Panda and Hunter Pence.

Pence batted .444 in the Series and Sandoval, a free-agent-to-be playing perhaps his last game for the Giants, finished at .429 following a three-hit night.

The Giants, a 20-1 longshot when 2014 odds were first posted a year ago, won their eighth title and third since moving from New York to San Francisco after the 1957 season.

Bruce Bochy became the 10th manager to win three World Series titles - the other nine are all in the Hall of Fame. AP