LG sees turnaround with success of its G3 phone

LG sees turnaround with success of its G3 phone 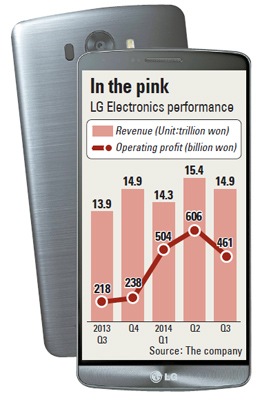 Is LG’s smartphone business experiencing a comeback thanks to the G3?

According to LG Electronics yesterday, profit more than doubled from a year earlier in the third quarter thanks largely to favorable sales of its G3 smartphone.

The company announced yesterday it posted 461 billion won ($440 million) in operating profit, up 112 percent from a year earlier, and 14.9 trillion won in revenue, an increase of 7 percent year-on-year.

The boost in both revenue and operating profit was thanks to the G3, which was released in June.

Its mobile communications business reported better-than-expected earnings as the operating profit turned around from a 79.7 billion won loss in the third quarter in 2013 to post a 167.4 billion won profit. It grew 95 percent compared to the previous quarter and it is the best quarterly performance since the third quarter of 2009.

The division’s quarterly revenue was the best in five years. The company said its mobile communication business was able to reclaim the 4 trillion won revenue that has been missed since the third quarter of 2009.

When compared to a year ago, revenue increased 39 percent to 4.2 trillion won. This was a 17 percent increase compared to the previous quarter.

“Although our marketing costs have increased, thanks to favorable sales [of the G3] and our efforts in securing competitiveness of our primary costs, our performance has significantly improved,” said an LG official. “In all areas including revenue and operating profit, this is the best performance we have seen since we officially jumped into the smartphone race in 2010.”

The outstanding performance by the mobile communication business stands in contrast to other businesses of LG Electronics.

Its home appliance, home entertainment and air-conditioning and energy solution business suffered in the third quarter. They either saw dips in their operating profits and revenues or recorded losses.

The company competed shoulder to shoulder with rival Samsung in many products before the smartphone race officially kicked off in 2010. Apple opened the era of the next-generation mobile phone with its first iPhone in 2007. In late 2009, the iPhone arrived in the local market and forced Korean tech companies to create their own smartphones.

Samsung released its first Galaxy smartphone in 2010 and rose to become the leading smartphone vendor in the global market. LG Electronics, which joined the race six months after Samsung, lagged behind and most of its smartphones failed to gain much global attention. The rapid rise of cheaper Chinese smartphones in recent years became a new threat to LG.

But the G3 is turning things around at the same time Samsung is witnessing its operating profit nose-dive because of dwindling popularity of the Galaxy S5.

So what made consumers pick the G3 over the Galaxy S5?

The G3’s hardware specs are impressive. It has a 5.5-inch quad HD display with a 2560 x 1440 pixel resolution, the highest display specs among Android phones. It provides much clearer pictures, videos and fonts compared to so-called full HD displays. Unlike competitors with large screens, it has a curved back and sloped edge that gives the user a better grip and allows the phone to be used with a single hand.

LG also upgraded its camera function with an autofocus system. The G3 has the longest battery life compared to rivals such as the Galaxy S5, Sony Xperia Z2 and HTC One.

The Galaxy S5 launched with great expectations earlier this year but consumers said it didn’t have innovative features compared to previous models and the design wasn’t distinct.

LG Electronics expects sales of the G3 to reach 10 million units by the first quarter of next year.

“Building on its momentum and two consecutive profitable quarters, LG expects to strengthen its positioning in the smartphone market with its G series and L Series III models despite the landscape becoming more competitive,” said Ken Hong, a spokesman for LG Electronics.

LG will continue a two-track strategy of seeking profitability and growth by targeting both premium and mid- to low-end markets with variations of the G series and L Series III.

According to market research firm Strategy Analytics, LG Electronics was ranked the world’s No. 3 manufacturer in terms of sales of smartphones last year and in the first half of this year.