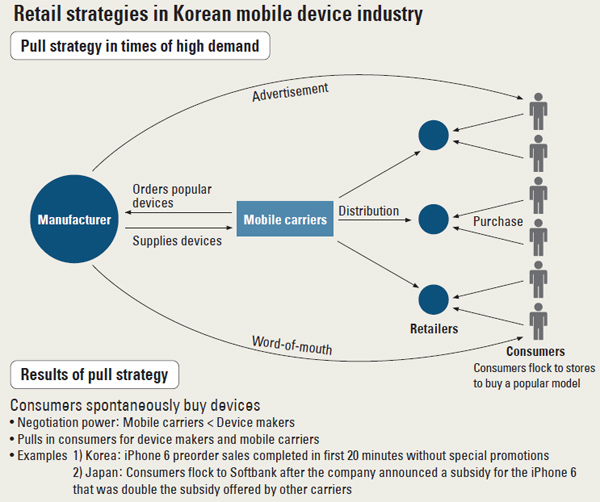 In June, U.S.-based large discount retail chains Walmart and Costco drastically cut their retail price for the iPhone 5S. A 16-gigabyte iPhone 5S with a two-year contract is now on sale for $79, down from $99.

The price of the iPhone 5S didn’t drop in the first few months after its release in September last year thanks to explosive sales. But Apple voluntarily dropped the factory price earlier this year because iPhone 5S sales started to slow as its competitors released new models. Apple’s decision to lower the factory price was also influenced by requests from American mobile carriers.

Apple wanted to sell as many older models as possible before the release of the iPhone 6 last month, and dropping the price of the iPhone 5 turned out to be a win-win strategy for mobile carriers and manufacturers.

As Apple’s case shows, successes and failures in mobile telecoms are determined by timely retail strategies. 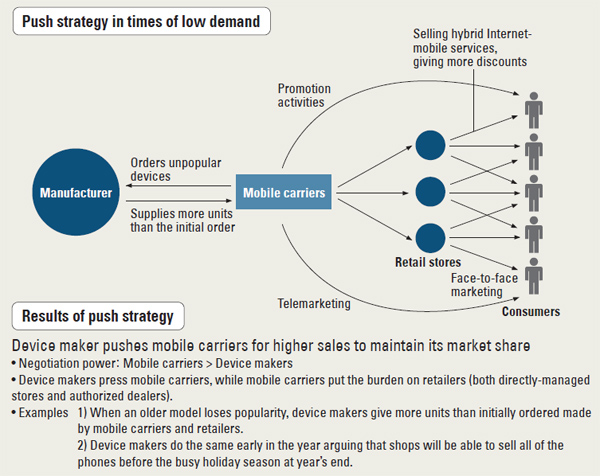 When sales are slow, manufacturers must find ways to encourage mobile carriers and phone retailers to buy more devices, which includes deciding the amount of subsidies Korean consumers receive. As smartphone manufacturers and carriers set prices and subsidies depending on the condition of the market, consumers will end up with the highest possible subsidy.

But since the Mobile Device Distribution Improvement Act took effect Oct. 1, the local mobile industry has been forced to change the way it sets prices.

“The original version of the act included a section that required separate notices for each device’s factory price and set a subsidy ceiling [at 300,000 won, or $286]. These go completely against market principles,” Cho said. “I think the government proposed these because they lack an overall understanding of the mobile telecoms industry, of which the main features are determined by the retail system for smartphones.”

The Ministry of Science, ICT and Future Planning and the Korea Communications Commission (KCC) hoped the act would reduce excessive competition among mobile carriers, and eventually lower consumers’ spending on monthly phone bills.

The act came after the nation’s top mobile carriers were punished twice this year by the KCC for offering huge subsidies on new smartphones in a bid to steal customers away from each other. But the large subsidies only applied to customers who bought expensive phones on pricey two-year plans.

However, the new law backfired on the government and the mobile industry, as consumers have almost stopped buying new phones because of the small subsidies.

Now, the nation’s three mobile carriers, SK Telecom, KT and LG U+, are preparing to start selling the new iPhone 6 and iPhone 6 Plus on Friday, and analysts say they will again by confonted with flaws in the act.

The three mobile carriers began taking preorders for the iPhone 6 last Friday at 3 p.m. But after 20 minutes, devices prepared for the preorder session ran out.

This is a perfect case of pull marketing because Apple brings in customers with little effort. Every time it releases a new product, thousands of fans voluntarily wait in long lines to get their hands on the device.

As a result, when the company releases a phone, competition is intense among carriers to get more Apple lovers to switch to their company. In this situation, phone manufacturers have the upper hand over telecoms at the negotiating table.

“When pull marketing succeeds, manufacturers don’t have to do much … because telecom carriers will voluntarily provide subsidies to customers. Market share drives them to do this, which is at the top of their business goals,” said a mobile industry insider.

LG U+ announced it will sell the 16-gigabyte iPhone 6 for about 700,000 won. But analysts say local consumers could get the new iPhone 6 for cheaper if there was no subsidy ceiling.

“The new distribution act succeeded in stopping some customers from buying devices at an unfairly cheaper price,” said Lee Byung-tae, professor and dean of the Korea Advanced Institute of Science and Technology’s (Kaist) College of Business.

“At the same time, the act closed a door to the possibility of implementing a free-device system like Softbank’s,” he said, referring to the Japanese mobile carrier’s marketing plan to offer the iPhone 6 for free on a two-year contract.

“In short, the government’s distribution act failed to serve consumers’ welfare in a practical sense.”

The Mobile Device Distribution Improvement Act also prevents smartphone makers from freely choosing how much they want to offer in subsidies to mobile carriers.

When a smartphone loses popularity or a competing model is released, mobile carriers have more say in the subsidy than manufacturers.

Outside Korea, Samsung Electronics has lost ground to Apple and low-end manufacturers like Xiaomi and Lenovo in China. Samsung has had to give bigger subsidies to sell as many Galaxy phones as possible to each mobile carrier’s retail network so the tech giant could maintain its market share.

But the situation is different in Korea. Samsung can’t continue to sell phones by paying subsidies out of its own pocket because of the government’s subsidy ceiling of 300,000 won.

“In this case, in there was no subsidy ceiling, the phone makers would be forced to spend more money on subsidies from double to four-fold the usual amount,” said an official from a local smartphone manufacturer. “This directly shows how important it is for them to maintain their market share.”

From a consumer’s point of view, mobile carriers’ retail policies seem unfair. The telecoms only give subsidies toward monthly payments on two-year contracts instead of giving a lump-sum subsidy on the price of a new smartphone. Industry insiders said this is because the carriers want to boost operating profit.

Analysts argue that the government should rethink the mobile device distribution act in order to make sure it achieves its intended goal - closing the gap in monthly phone payments among consumers.

“The same market mechanism applies to all kinds of products that go through retail networks, whether the product is expensive or not,” said Lee Kyung-mook, a professor at Seoul National University Business School.

“The government should try to understand the reason why manufacturers and mobile carriers have kept their pricing model, and reflect this market principle in its policy.”