It was evident that Samsung Electronics’ mobile business was the primary reason behind the dive in its third-quarter earnings released yesterday.

And the tech giant’s prospects for the fourth quarter aren’t looking up. Many analysts are betting that its operating profit will stay about the same despite the release of the Galaxy Note Edge.

According to Samsung yesterday, its IT and mobile communications business performance plunged in the third quarter as its revenue from smartphones shrank 32.8 percent year-on-year and was 13.6 percent less than in the second quarter.

Samsung Electronics’ operating profit for its IT and mobile communications business dropped nearly 74 percent year-on-year and also declined 60 percent from the previous quarter. 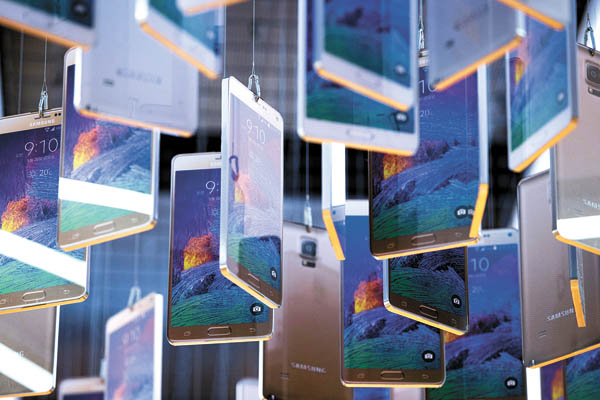 The third quarter was the first time in three years that Samsung’s operating profit fell below 5 trillion won. The last time was in the fourth quarter of 2011 when it hit 4.67 trillion won.

The company said that smartphones sales were not to blame for the lackluster performance, and instead pointed to rising competition from Chinese companies in the market for entry-level devices.

Samsung’s smartphone sales increased slightly from July through September, but the average price declined from $230 per unit in the second quarter to $190 last quarter.

“Overall sales of smartphones grew modestly,” said Lee Myoung-jin, Samsung executive for investor relations. “However, as the proportion of low-priced products increased, we have cut the prices of existing models, which resulted in a lower average sales price. The lower average sales price and increased marketing expenses contributed to the earnings decline compared to the previous quarter.”

Forecasts for the fourth quarter and next year are also looking bleak. From October through December, consumer electronics sales will recover slightly with the help of Black Friday, the largest shopping season in the United States, and Christmas. But Samsung Electronics’ profitability is expected to continue to fall as competition for cheaper smartphones intensifies.

Samsung is trying to become a contender in the market for mid- to low-end phones with the release of the Galaxy A series next month. Devices in the series range from 350,000 won to 500,000 won, which is about 600,000 won cheaper than the Galaxy Note Edge.

Despite the disappointing third-quarter earnings report, Samsung Electronics’ stock value rose yesterday, closing 4.5 percent higher than the previous day. The increase was due to the company’s announcement that it will step up its shareholders’ investment return policy.

“Samsung’s executives regret that our stock prices have been falling because of the worsening performance. Samsung will focus on recovering competitiveness and earnings to turn things around in 2015,” Lee said. “Considering the shareholders’ needs, we are reviewing our shareholders’ return policy for 2014 and we will announce the results along with the fourth-quarter earnings.”

Market analysts say that the tech company’s next move will be diversifying its business away from smartphones and into other IT areas including the Internet of Things and smart homes.