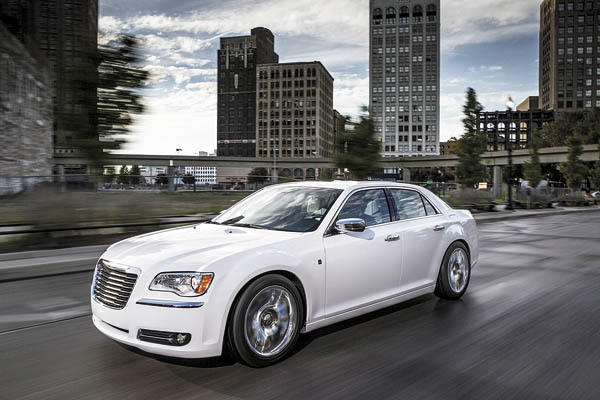 Chrysler Korea has enjoyed a rapid increase in sales thanks to its special promotion commemorating the 10th anniversary launch of its premium sedan 300C in Korea. The promotion was also held to celebrate the signing of the free trade agreement between Korea and Canada.

A special discounted price has been applied to the large diesel sedan, as well as the gasoline and all-wheel-drive models.

The total sales of the 300C from the start of the year to last month recorded its highest number since 1996 with 4,627 cars sold. This was a 38 percent increase from the 3,355 vehicles sold in the same period last year.

In addition to the 300C, the new Grand Cherokee and the all-new Jeep Cherokee are performing very well in the market.

The diesel model’s sales have skyrocketed from 21 cars in August to 123 cars in the month after thanks to the promotion, which began in September.

Customers were attracted to the model because its discounted price was comparable to large sedans in the domestic market.

The model is also very fuel efficient, which goes against the stereotype that large American sedans get low mileage per gallon. With 13.8 kilometers per liter (32.4 miles per gallon), the fuel economy is superior than some German cars of the same size. Its 3.0-liter turbo diesel engine, jointly developed with the Italian auto manufacturer Fiat, was designed with light and strong materials to boost fuel efficiency and reduce noise.

Chrysler’s 300C also appeals to the drivers with its verified safety. The car was selected as the Top Safety Pick by the Insurance Institute for Highway Safety for three consecutive years.

The company expects sales to reach 6,000 at the end of this year.

“Chrysler’s 300C is the wisest choice you can make within the large sedan segment,” said a company official.