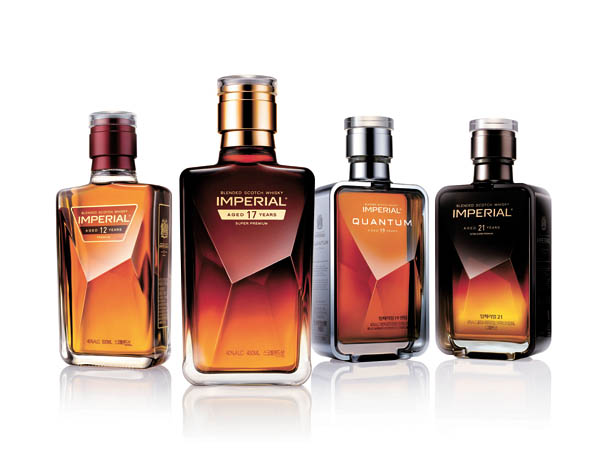 The newly designed bottles of Imperial are differentiated by hue to indicate the age of the whiskey. Provided by the company

Imperial, one of Korea’s most popular premium whiskeys, continues to attract consumers with its stylish bottle designs.

The whisky was first released in the market with different bottle designs that corresponded with the age of the liquor. The change in the bottle design is one of the ways the liquor maker tries to communicate with consumers.

Pernod Ricard, a France-based international liquor maker that produces various premium wines and spirits, including Imperial, established a family of looks for the whisky bottles with different details to tell the ages apart.

Imperial’s marketing concept and tactics were recently recognized by the industry. The modern and sophisticated look, created by bottles with diamond-angled cuts, won a Red Dot Award for communication design this year.

This was not the first time the company has won a design award. In 2011, Imperial won at the Korea Star Awards and at the WorldStar Packaging Design Awards in 2012. Also, the whisky’s new, modern brand identity won during the 2012 Red Dot Design Awards.

The company’s attempt to change the design of its packaging started in 2010, when it launched a new product, Imperial 19 Quantum. Its diamond-angle-cut bottle with silver frames and the unique age of 19 drew attention in the market.

The popularity of the new product triggered the renewal of the Imperial brand. The signature of the package, the diamond cut, was applied to other products of the brand and became the representative image.

The color shades of red, brown and black differentiate each product.

The company has also put in effort to prevent counterfeits. A yellow band appears at the top of the bottle cap when it is twisted off. Customers will be able to establish the validity of the bottle if the yellow band doesn’t appear on the cap. This simple device will help people easily recognize any bogus products.

Imperial also appealed to customers with its limited-edition whiskeys such as the city edition, which are only sold in Daegu, Gwangju, Jeju, Pyeongchang, Busan and Daejeon. Busan Imperial released a special edition Park Ji-sung whiskey in 2008 a Jang Dong-gun edition in 2013 to promote the rich taste and flavor of the liquor to residents in the area.

This year, Imperial presented a special limited-edition series to celebrate its 20th anniversary under the theme “modern Korea.”

Designer Kim Young-se put a traditional touch on the modern whisky’s bottle with inspiration from white porcelain and celadon.

“We expect Imperial’s attempt to reach out to the customers with differentiated design will boost the consumption in the whisky market,” said a Pernod Ricard official.