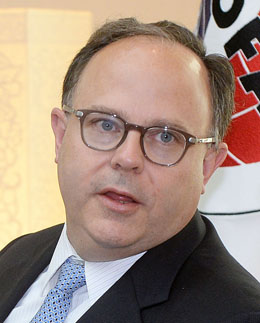 
The U.S. special envoy on the six-party talks said Washington is not pursuing the denuclearization of North Korea as a pre-condition for resuming the six-party talks with the reclusive state, but made it clear that while talks are under way, Pyongyang must halt its nuclear activities.

North Korea pulled out of the multinational dialogue late 2008, and while the country’s denuclearization is a stated diplomatic priority for Seoul and its key allies, there are few realistic hopes that Kim Jong-un will give up his arsenal.

“It’s interesting that North Korea claimed that we were asking them to denuclearize before the talks even start,” Sydney Seiler said during a meeting with the press yesterday at the Asan Institute for Policy Studies in Seoul. “It is somewhat assumed to be representative of our position. What we are saying is the program should not be running while we are talking.”

The six-party talks were originally formed with the two Koreas, Japan, Russia, China and the United States, with the aim of convincing Pyongyang to abandon its nuclear ambitions and to resolve security concerns on the Peninsula.

Seiler made sure to stress, however, that all activities related to nuclear development must be halted while talks were under way, with it being “the very least of what we expect of authentic, credible talks” with the regime.

“We assume that, of course, talks by the very definition, take place without threatening provocative actions on the way, such as nuclear test and missile launches,” he said.

Seiler added that after all uranium enrichment facilities are shut down, along with other nuclear related programs being ceased, there “will be inductive conditions under which we could be credibly talking about denuclearization.”

On Pyongyang’s repeated refusal to have discussions on its denuclearization, he remarked, “It’s hard to conclude anything other than North Koreans would like to talk as long as denuclearization is not on the table.”

On pointing out the importance of inducing the North to give up its nuclear programs, the special envoy said the Communist state’s nuclear ambition is “a threat to the region and is a global threat, especially in terms of its proliferation potential.”

When asked about his secret trips to Pyongyang last month in seeking ways to resume the six-party talks, the envoy neither acknowledged or denied the report, only saying he had “no further information” on the matter.