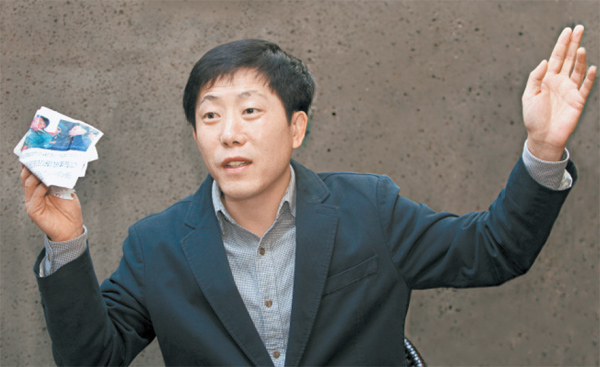 Park Sang-hak, a North Korean defector who has organized the controversial anti-Pyongyang leaflet campaign since 2004, talks about his stance on the launch of leaflets on Wednesday in Seoul. By Park Sang-moon


The defector behind the anti-North Korea leaflet campaign said he is willing to ground his balloons if Pyongyang apologizes for the sinking of the warship Cheonan, the shelling of Yeonpyeong Island and the killing of a South Korean tourist at the Mt. Kumgang resort.

“I will immediately stop my leaflet campaign if the Kim Jong-un regime apologizes for the three accidents in a sincere manner,” said Park Sang-hak, 46, a North Korean defector who has organized the controversial campaign since 2004, in an exclusive interview with the Korea JoongAng Daily on Wednesday.

Pyongyang blamed Park’s leaflets and balloons for turning down an invitation to high-level talks with Seoul this week, saying the South had to stop them.

In the interview, Park admitted that the North is known to rarely apologize to the South Korean government for military attacks or other provocations, including its bombing of a commercial flight in 1987.

It was the first time the chief organizer of the leaflet campaign, which the North has compared to a declaration of war, gave conditions for a stop to the campaign.

The activist said he would not only stop the campaign if Pyongyang apologizes, but he would also call on companies in the South to invest in the North. “If the North shows its commitment to follow in the footsteps of China and Vietnam toward economic reform and embrace the global economy, I will ask business owners to invest up there instead of investing in China or Vietnam,” he said.

Despite Park’s offer, there’s little likelihood of the three apologies being given.

North Korea consistently denies it torpedoed the Cheonan warship in the Yellow Sea in March 2010, which killed 46 Navy sailors. It has also never apologized for the shelling of Yeonpyeong Island off the east coast that left two Marines and two civilians dead, or even explained the killing of a female South Korean tourist at the Mt. Kumgang resort by a North Korea soldier in 2008.

Park made it clear he will continue his campaign if the North refuses to apologize. He called the North’s demand of the Park Geun-hye government to forcibly stop his campaign a “sly strategy to provoke internal conflict among South Koreans.”

“It is part of Pyongyang’s sly tactic to blame the leaflet campaign for strained inter-Korea relations,” he said. “If the Seoul government accepts its demands, it will fall into its trap. In turn, the North will demand the South recognize a maritime border in the Yellow Sea unilaterally drawn by it. It will also demand the Park government prevent the South Korean media from making critical reports about its leadership.”

Park said he plans two more balloon launches for the remainder of the year, although he wouldn’t reveal any dates or locations.

Park’s dispatching of helium balloons carrying hundreds of thousands of leaflets accusing Pyongyang of starving millions to death and violating the basic human rights of its people has become a hot potato in the Seoul-Pyongyang relationship. The North has repeatedly called on the Park Geun-hye government to stop the campaign, going so far as to threaten to attack the areas where the balloons are launched with deadly force.

On Oct. 10, North Korean artillery fired at balloons dispatched from Yeoncheon County, Gyeonggi, a town on the border, provoking response fire from the South.

Park said the North Korean military fired at the balloons on direct orders from leader Kim Jong-un. Park said Kim made the order after seeing some of the leaflets personally, citing sources in the North.

“I was told [by a North Korean source] that Kim Jong-un had seen leaflets at his vacation villa in Wonsan, Kangwon Province, on Sept. 8,” said Park. He said the leaflets reportedly seen by Kim were ones dispatched by Park’s group on the Chuseok holiday from Mt. Odu in Paju.

“Enraged by what he saw in the leaflets, he arranged an emergency meeting with senior military officials, ranked corps commander and above, on or around Sept. 13, ordering them to shoot down any balloon they see coming from the South.”

Park said a military commander in the meeting objected to the measure.

“I was told one commander objected to the shooting because the leaflets carried photos of Kim Il Sung and Kim Jong-il.”

In North Korea, photos of the two former leaders are considered so precious that shooting at them is equivalent to shooting at the real individuals and is punishable by death.

“Kim Jong-un brushed off those concerns, telling them to do everything in their capacity to prevent leaflets humiliating North Korea’s former leaders from falling onto North Korean soil,” Park said.

Park’s campaign is not without critics, who say it threatens a rare opportunity for the two Koreas to mend fences. Some people also worry that it brings risks to the border towns from which the balloons are launched.

A graduate of Pyongyang’s prestigious Kim Chaek University of Technology and the son of a former espionage agent, Park told the Korea JoongAng Daily he has scores of sources in the North who deliver firsthand accounts of what is happening in one of the most reclusive police states.

Citing accounts by his sources, Park said Kim Kyong-hui, the widow of Jang Song-thaek - the formerly powerful uncle of Kim Jong-un who fell from grace and was executed last December - is in a vegetative state after suffering a cerebral hemorrhage.

“I was told that she had a stroke over the shock of Jang’s death,” Park said. “And given that she hasn’t been seen in public for almost a year, the story seems to be confirmed.”