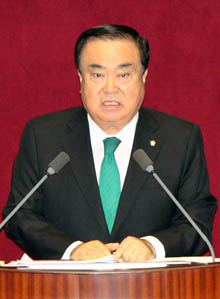 The head of the emergency committee of the main opposition New Politics Alliance for Democracy (NPAD) reignited debate over a possible constitutional amendment, an idea President Park Geun-hye stands against.

In an address yesterday to the parliamentary negotiation bodies, Rep. Moon Hee-sang, the interim chairman of the main opposition party, said that now is the “best time” to reform the Korean Constitution, which centers around a five-year single-term presidency.

The veteran politician, elected on Sept. 18 to fill the vacancy left after Rep. Park Young-sun stepped down from the position, also came up with detailed timeline for the amendment. 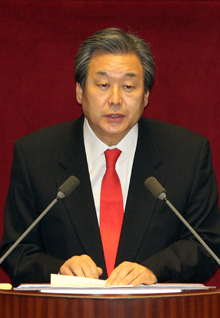 A special committee dedicated to the reform could be formed by the year’s end, he said.

The issue could then be discussed throughout 2015 and the amendment completed before the 2016 legislative election.

Rep. Moon blamed the country’s crippled politics for the current political system, which grants the most power to a single top authority, and compared Korea’s political landscape to a “jungle-like system where the principle of survival of the fittest works.”

His bold remarks come nearly two weeks after ruling Saenuri Party Chairman Kim Moo-sung brought up the urgency of a constitutional reform on Oct. 16 during a trip to China, though he hastily apologized to the president just a day later, likely fearing a rift with the Blue House.

Rep. Kim’s apology and his subsequently lower posture in regard to overhauling the current presidential system appeared to phase out the debate until yesterday when Rep. Moon raised the issue again. He had already forewarned on Wednesday in a closed-door meeting with the president at the National Assembly that he would talk “a lot about constitutional amendment during the schedule [on Thursday].”

“The Blue House is the loneliest post that can never allow you, the top decision maker and top person in charge, to blame anyone else or pass the bucket,” he said.

“Koreans want a mother-like president who is able to embrace the 48.5 percent, those who did not vote for her [during the presidential election].”

He also attacked the ruling Saenuri Party, saying it merely concentrated on pocketing the reflective benefits of blaming the opposition, despite its duty to keep the Blue House in check.

Saenuri Chairman Kim also addressed the negotiation bodies at the Assembly yesterday, though his speech was mostly focused on his appreciation for President Park’s speech a day earlier about resuscitating the economy.

In a related effort, he proposed a nationwide campaign aimed at achieving a social consensus. Led by both the ruling and opposition parties, the campaign should encourage the participation of both the private and public sectors and labor and management, he said.

“The goal of a grand social agreement is to build a country based on coexistence and joint prosperity,” he said during his address. “The top priority is nationwide compromise on the level of welfare they want.”