Top envoy has a warm welcome

Top envoy has a warm welcome 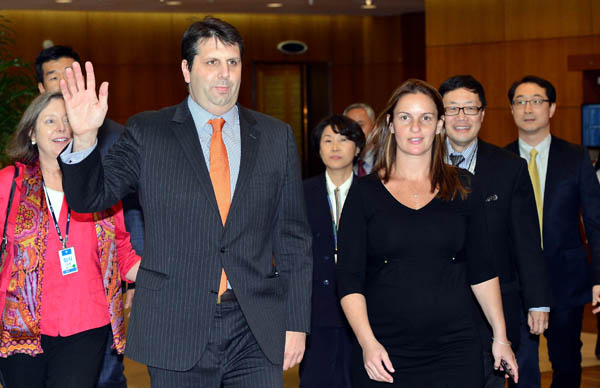 Mark Lippert, the new U.S. ambassador to Korea, vowed yesterday upon his arrival here to ensure that his country remains fully aligned in its efforts to achieve the “complete, verifiable and irreversible denuclearization of North Korea and prevent the proliferation of key technology.”

“I will work to strengthen our critical military alliance, expand our economic and trade relationship and ensure that our alliance continues to tackle global challenges from counter terrorism and counter piracy to climate change and development,” he said in a press conference that was followed by a brief question-and-answer session.

U.S. Secretary of State John Kerry last Friday swore in the new ambassador at the Korean Embassy in Washington D.C. in the presence of President Barack Obama. Obama did not attend the inaugurations for the U.S. ambassadors to Japan or China - a testament to his close friendship with Lippert.

The beginning of his tenure here comes more than five months after U.S. President Obama nominated him. Even though the Senate Foreign Relations Committee approved his nomination on June 24, the confirmation was stalled, along with dozens of other ambassador appointees, because of a political impasse.

The Senate finally confirmed Lippert’s appointment a month ago despite opposition from Republicans who objected to his close personal ties with Obama.

The Korean government welcomed Lippert and was optimistic about his potential role in helping to thaw long-standing tension between Korea and Japan.

“It’s in the United States’ interest for Seoul and Tokyo to have a good relationship, and the president and everyone at the State Department is committed to working to encourage both better bilateral and trilateral ties in the region,” he said in the conference.

However, some experts are skeptical about whether the new ambassador will be able to have a significant impact on strained Korea-Japan ties.

“Korea may be hoping that he has been granted greater autonomy [from the U.S. government] than other career diplomats because he is one of Obama’s political appointees,” said Kim Dongryul, a professor at Korea National Diplomatic Academy, “but both Korea and Japan can’t realistically hope for such a big change upon his arrival, given the regulatory boundaries that any ambassador is given.”

The United States is concerned that ongoing tension between Seoul and Tokyo will hamper regional security, posing a threat to cooperation among Korea, the United States and Japan to maintain a united front against North Korea’s nuclear, ballistic missile and proliferation programs.

Lippert is a graduate of Stanford University and studied Mandarin Chinese at Peking University as part of a study-abroad program. The ambassador also worked as a top foreign policy adviser to Obama in 2005, who was then a U.S. senator.

Despite being a relatively obscure figure, Lippert has drawn attention from observers for his close personal ties with the White House and extensive network within the National Security Council and the Department of Defense. He is also known to have a tight working relationship with General Curtis M. Scaparrotti, the commander of the U.S. Forces in Korea.