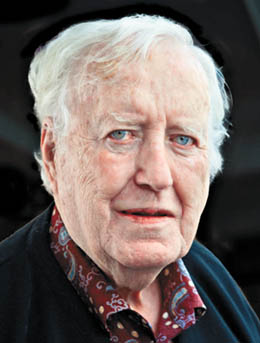 When Father Patrick James McGlinchey first heard he would be dispatched to Korea 63 years ago in 1951 to work as a missionary, he was terrified.

The Irish priest knew the Asian country was enveloped in tragedy and chaos, because local newspapers and radio reports at that time were flooded with coverage on the rising death toll in the Korean War.

He finally set foot in the South in 1953, arriving in Busan. A year later, he moved to Jeju Island.

After six decades living on Jeju, one of his greatest achievements is having earned the nickname “pig priest,” and the heroic story behind that epithet is what has made him one of the most revered persons on the island, as well as in the Irish expatriate community.

The Embassy of Ireland announced that McGlinchey was the recipient of Ireland’s Presidential Distinguished Service Award on Wednesday for his tireless dedication to pulling thousands of Jeju residents out of poverty.

His greatest achievements include founding the St. Isidore Farm, which according to the embassy, refers to his model of development and profitable farming that encourages the use of underused farm land and new farming methods.

The following is an edited excerpt of an email interview with McGlinchey:

Q. What motivated your interest in farming?

A. My father was a veterinarian, and living in the suburbs, I grew up milking cows. I also raised a few pigs at my house. When my father visited other farms, I used to tag along and see how he advised neighbors on their farming methods, and it was then when I realized how meaningful it was to help others.

Where does your nickname “pig priest” come from?

I think it was around the late 1950s when I began raising a pig on the front lawn of my church. I did a lot of legwork to raise money to buy more pigs, elbowing missionaries and charities in advanced countries. I even asked my parents to chip in, and they willingly did. One time, my father asked me why I was purchasing so much land and so many pigs, when my purpose coming here was missionary work.

Why did you establish St. Isidore Farm?

When I first came here, people knew very little about livestock. I kept advising elders in the village, but they just wouldn’t listen. The word I most frequently heard was “no.” They kept telling me that the Japanese had experimented with that method, but failed - and that if the Japanese had failed, it just meant no.

So then I began educating teenagers, thinking if they changed, the elders would, too. But I was totally mistaken; I didn’t know about Confucian culture, or that a son could never teach his father. Nevertheless, the St. Isidore Farm, where I taught teenagers about livestock, flourished and by the mid-1960s, it became the country’s largest pig farm with about 13,000 pigs.

How do you feel about receiving the Irish presidential award?

It’s an honor, but certainly not the kind I’ve achieved on my own. To be frank, my mind was settled on another aspect when I first heard the news: prize money. I was disappointed when I heard about the absence of it, because I was looking forward to donating the sum to the hospice welfare center I’m running free for patients.