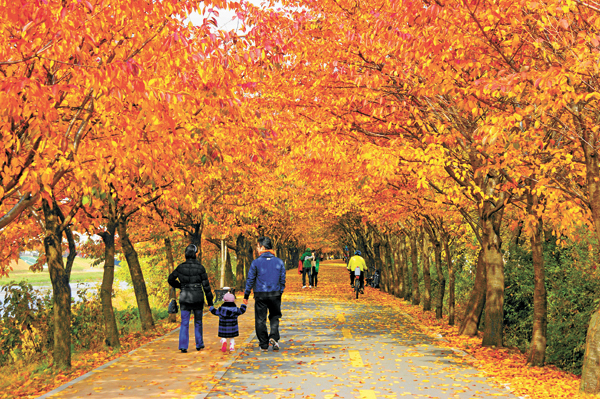 Jebang Trail alongside Anyangcheon Stream in Geumcheon District, southwestern Seoul, was chosen by Seoul Metropolitan Government this year as one of the most beautiful places to see the fall leaves. Provided by the government

The weather is turning chilly, but the fall season brings its own charm: the changing of the leaves.

Early this month, many people ventured to Mount Seorak in Gangwon, where the foliage had started to change color due to the higher altitude. But there is no need to travel far away for a scenic view anymore; waves of red and yellow are now quickly descending on the south and the west of the country.

Vibrant leaves will decorate Seoul and its metropolitan area from this weekend, according to a forecast by the Korea Meteorological Administration.

So forget about driving for hours, taking trains or buses and getting stuck in stressful traffic jams. Take public transportations to major mountains, parks and nearby trails or go for a relatively shorter 30 minutes to an hour drive to get into the fall spirit before it quickly becomes achingly cold winter in just a few weeks.

And with more rain forecast in the coming days, hurry before all the leaves lose their grip on the trees.

Destinations in the city

The Seoul Metropolitan Government has released a list of 94 different places that are known for their scenic fall views.

The administration broke the list down into four different themes: trails along the water, trails along tourist attractions, trails in parks and trails for light trekking. 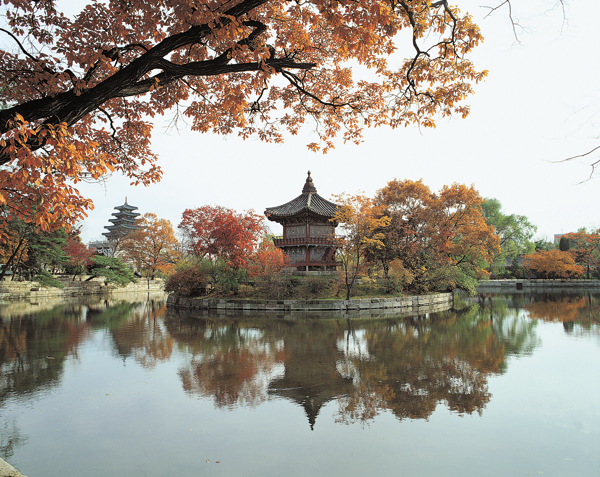 Hyangwonjeong, a tower in Gyeongbok Palace, is a popular spot to see how a traditional Korean-style structure harmonizes with the colorful autumn leaves.

If you choose the first option - a walk alongside water - you don’t need to worry about getting stressed from waiting at a crossroads or alleyway for a vehicle to pass: the fourteen places recommended in this category are all free from cars.

Many people easily mistake Yeouido in western Seoul as a hot spot dedicated to spring cherry blossoms, but the area is also an apt choice for some autumnal appreciation. A walk along Yeoui Seoro near Saet River, which flows around the small island, is about three kilometers (around 1.9 miles) in length, which is perfect for a quick stroll in the morning or after lunch.

There is a significant chance you will have visited the trails that are recommended near tourist attractions. The list includes the sidewalks of Samcheong-dong, central Seoul, which is known for its accessory stores and tasty restaurants, or a walk along the walls of Deoksu Palace, also in the center of the city, which leads to the Seoul Museum of Art.

These paths are relatively shorter as they are located in the condensed downtown area so are usually no longer than 1.5 kilometers.

The trails at parks picked out by the Seoul government include Olympic Park in Songpa District, southern Seoul, which has gingko trees that are about two decades old, and Ttukseom Seoul Forest, which has a natural environment that harmonizes well with the Han River.

Most of the listed trails fall under the fourth theme, however. Sowol road in Namsan, central Seoul, the streets up to Walkerhill Hotel in Gwangjin, northeastern Seoul, or the trails in Mount Gwanak, southwestern Seoul are all great places to visit. 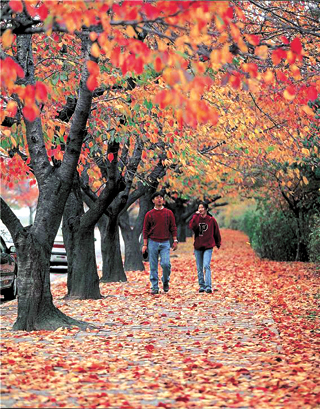 Yeoui Seo-ro, a riverside trail in Yeouido, western Seoul, is covered in red leaves. The island, known for its spring cherry blossoms, is also a good spot for fall.

For more information about Seoul Metropolitan Government’s recommended list, go to www.seoul.go.kr/campaign2014/autumn, or download the mobile application “Smart Seoul Map” to your phone.

You could think that leaves turning color is a common scene that is not special to Korea. However, a vibrant fall view over a giwa, or roof of a traditional Korean building, is something you can only see here.

Seoul’s four royal palaces - Gyeongbok, Changdeok, Changgyeong, and Deoksu - are good places to start as they are easily accessible in central Seoul. Because the royal residences are surrounded by tall trees and are accompanied by walking trails, they are recommended whenever the season changes.

The brown wooden structure and the green paint that fills the space between the roofs and the rest of the hanok, or traditional house, create a sublime contrast so that the leaves stand out even more.

You could kill two birds with one stone if you visit Deoksu Palace. The Daehan Empire History Museum, which was formerly known as Seokjojeon, a western-style building constructed in the late 19th century, has recently reopened there. The Cultural Heritage Administration reconstructed many of the building’s interior items as well as the exterior during the five-year revamp project.

During the week you can also pay a visit at night because the facility is open from 9 a.m. to 9 p.m. every day except Monday. This differs from the other palaces that only keep their gates open in the evening during special periods.

If visiting the palaces is too grandiose for your taste and you want something more low key, the royal tombs could be the best choice.

Seolleung in Gangnam District, southern Seoul, stays open until 9 p.m. for people who don’t mind appreciating the falling leaves in a lower temperature.

If hard-core hiking isn’t your thing but you still want to see a tree-filled mountain up close, head to Mount Soyo in Dongducheon, Gyeonggi. Its peak is relatively low in height at 587 meters (1926 feet), which makes reaching it a low-effort hike.

The area is also very easily accessible as there is a subway station nearby. Go to Soyosan station, line No. 1, exit No. 1. Walk about 900 meters until you see the ticket office. Admission to the mountain’s hiking trail costs 1,000 won. 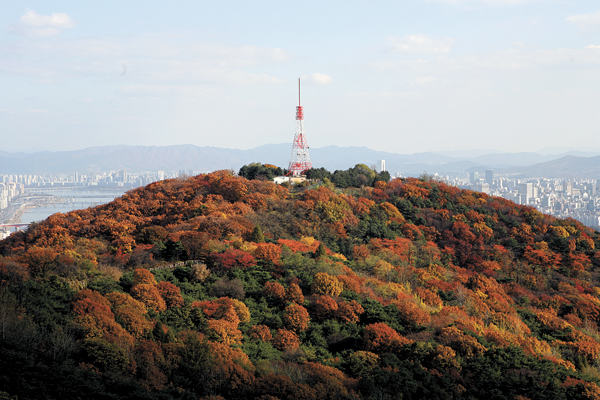 An aerial view of Mount Namsan, central Seoul, is covered in trees with their green leaves turning to yellow and red. Provided by the Korea Tourism Organization

If you want to feel short of breath on a hike, the Gyeonggi Tourism Organization recommends Mount Hwa-ak and Mount Myeongji in Gapeyong for a superb seasonal experience.

The two are Gyeonggi’s highest mountains. Hwa-ak is around 1,468 meters in height while Myeongji comes in at 1,267 meters.

The mountain will take you to trails covered in yellow gingko trees on one side and another frosted with red maples. Make sure to look where you are going as you will be easily distracted by the beauty of your surroundings.

Go to East Seoul Terminal and take a bus to Gapyeong Bus Terminal, or go to Cheongryangri station and take Gyeongchun Line to Gapyeong station.

For families wanting to include some history into a weekend getaway, Namhansanseong, or Mount Namhan Fortress, is an educational jaunt for children.

The historical fortress sits on the southeastern outskirts of Seoul in Gwangju, Gyeonggi. It was designated as a Unesco World Heritage site in July in recognition of the structure’s architectural and militaristic qualities.

The fortress is located on a plateau with an elevation of 500 meters, a rarity in Korea. Its geographical position helped protect the nation during the Second Manchu Invasion of Korea in 1636. King Injo then took refuge there for nearly two months.