Economist envisions low-cost future ushered in by IT

Economist envisions low-cost future ushered in by IT 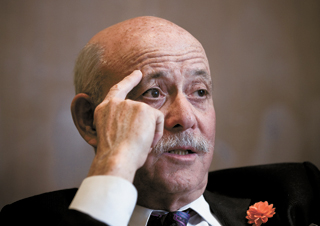 New technology is introduced every day - from wearable devices to 3-D printing to health care robots. But it is often difficult to figure out what all this means in a larger sense for the economy and society.

Jeremy Rifkin, an economist and prominent thinker, explains that technology’s evolution is leading us into a “zero marginal cost society,” where goods, content and services are being produced cheaply or for free.

Rifkin, president of the Foundation on Economic Trends, visited Korea last month to deliver a speech on the coming era at the 15th World Knowledge Forum.

Afterward, he discussed the new age in a question and answer session with the media on Oct. 14.

Q. How did you come up with the notion of a zero marginal cost society?

A. Over the last 20 years we’ve seen the zero marginal cost phenomenon having an impact on virtually every sector, ranging from the media, knowledge and information industry. One good example is Napster and other file-sharing services where millions of young people create or mix and match their own music and share it with each other through the Internet. What is interesting is that all of these activities took place at near-zero marginal cost. Then young people moved on to YouTube and they began to share with each other at near-zero marginal cost again, bypassing the TV and film industry. Another example is the media industry. People no longer solely rely on the news created by big media organizations. Instead, millions of young people began to produce their own news and knowledge through news blogs and Wikipedia. So while people listen to music and read news content, people don’t need to pay marginal cost.

How does the Internet of Things work in a zero marginal cost society?

The Internet of Things will connect everyone and everything in a seamless network and help us move into a zero marginal cost society. We can go up on this Internet of Things now and we can now handle big data flowing and connect it with analytics through our smartphone and apps. This is not only for highly-educated engineers. So through apps with our mobile technology, big data to dramatically increase our productivity, we can reduce our marginal cost in the production of physical things like energy and 3-D printed products. That’s already begun.

But isn’t the change and revolution that is made possible by advanced information and communication technology hard to apply to developing countries without a basic network infrastructure?

Yes, in the developing world, you don’t have all the infrastructure. But this also means that they can move quicker because they don’t have to transform the old infrastructure to the new. Let me put this way: My wife and I have a very old house and we have renovated this house for 25 years, so it’s a bottomless pit. But if we bought a new house from scratch, it’s much cheaper.

What do you make of the argument that your idea is only applicable to virtual things such as ideas and media content rather than commodities such as agricultural produce?

What we can produce at near-zero marginal cost is virtual goods, information, news, renewable energy and logistics we can share. The only thing that we can’t move to zero marginal cost is food and water. In the book, I wrote a chapter about climate change. If climate change gets quicker, we can’t properly grow food and there will be not enough water. Then, we will be in trouble.

But this doesn’t necessarily mean that the agricultural sector has nothing to do with the idea of collaborative commons. There is a system called community-supported agriculture. On the web, consumers can make contact with farmers. Then the consumers can form a cooperative. They pay for the farmers’ seeds a year in advance so they become part owners. Then the farmer produces the products and delivers the produce directly to the involved consumers. In a good harvest year, they get more food and in a bad harvest, they get the risk. But they have eliminated all the middlemen. So, it’s cheaper because they eliminated wholesalers, retailers and transports. The web allows them to reduce marginal costs of connecting the farmers with consumers to zero.

Many developing countries have shared several stages of progression. At the beginning they used cheap labor and then acquired knowledge from more developed countries. They then finally moved on to become more technology-oriented. What will be the development phases in the coming era?

I grew up learning the same philosophy. Many developing countries would first pick up something that could take advantage of cheap labor and then learn information and knowledge and finally become more technology-oriented.

But now it is really amazing how fast someone digitally illiterate in a developing country, or even in the Amazon, will learn how to use the Internet and software. They can do what you do on the Internet. Young people can learn the technology and will become a sophisticated user literally overnight. It is amazing to see that almost 40 percent of people in the world are now connected to the Internet. This is basically leveling the playing field. Traditional infrastructure will play a smaller part in the coming sharing, economic, zero marginal cost society.