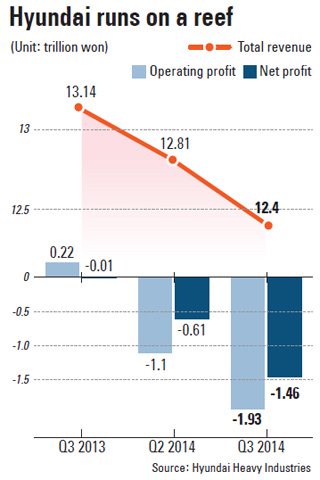 Will there be a breakthrough for the nation’s leading shipbuilder Hyundai Heavy Industries (HHI) after it seems to have run aground on a reef?

A day after the company posted its worst quarterly performance ever on Thursday, its labor union, whichhas been negotiating with the company over wages, declared yesterday that it would engage in a two-hour strike from 3 to 5 p.m. on November 7. It will be the first strike at HHI since 1994. The union walked out on its scheduled extra hour of work at 5 p.m. and made the decision in a meeting held at their office in Ulsan.

If the union agrees to more strikes, the company is expected to incur sales losses of 103 billion won.

Earlier in the day, the company’s shares fell slightly to close at 99,200 won, down 0.8 percent, after falling as low as 89,500 won at one point. The company’s value plunged 5.21 percent to 100,000 won on Thursday when it posted its third quarter performance.

Industry insiders previously said that Hyundai had hit rock bottom in the second quarter, but after an even bigger loss, they said the company might need much longer to recover.

The company said its poor performance was due to its shipbuilding and industrial plant businesses. HHI said that a total of 592.2 billion won of losses were mainly due to construction delays in building the Jeddah South and Shuqaiq thermal power plants in Saudi Arabia.

The company’s affiliates Hyundai Mipo Dockyard and Hyundai Samho Heavy Industries had combined losses of 464.2 billion won after they won contracts to build semi-submersible oil prospecting ships and 50,000-ton level petrochemical carriers for prices that were too low.

“We reflected all the predicted losses from the second quarter performance record as part of our efforts to make a fresh start, but we found additional expected losses from projects started after the first half of the year,” a spokesman for HHI said.

“Since we are examining ourselves in cold blood, we decided to reflect all the predicted loss in the third quarter performance result to restore our trust in the industry.”

But it is questionable whether the shipbuilder can bounce back. HHI said it expects to make about 50 billion won in operating profit next quarter because of stability in the steel, energy development and petrochemical industries, in which it makes the most money after its shipbuilding and plant businesses.

The company said in January that its goal is to win $295 million worth in contracts this year, but it had won only $163 million as of September.

“It’s not only a problem for Hyundai,” said Noh Jae-woong, a researcher at the Korea Investors Service. “Due to unstable crude oil prices, the number of orders has decreased and Korean shipbuilders also have lost price competitiveness due to a strong Korean won. China’s recent growth in building LNG carriers and drillships that are considered high quality products in the business is also a threat.”