Posco builds car sheet mill with its own tech

Posco builds car sheet mill with its own tech 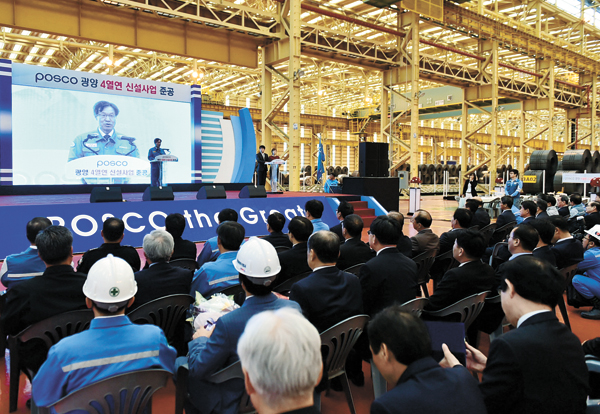 Posco, the nation’s leading steelmaker, has completed a rolling mill with a capacity of 3.3 million tons of steel products per year.

The company said yesterday that its fourth hot strip rolling mill was built at its Gwangyang plant in South Jeolla. The company added that the plant is a meaningful addition because the factory’s core facilities, including its furnace, were designed and created with in-house technology.

Affiliate Posco Engineering and Construction was responsible for the heating furnace, rolling mill and metal winding facilities, and Posco ICT managed the software, including the electric installations. In the past, most steelmakers including Posco relied on foreign companies to build such facilities, the company said.

In the new mill at Gwangyang, Posco expects to produce high-quality steel sheets that can be made as thin as 1.2 millimeters (0.04 inch) or as thick as 22 millimeters, with widths ranging from 700 to 1,950 millimeters. Most will be exported to global automakers such as Volkswagen, Toyota, Ford and Nissan.

“We were able to build this facility because every organization that took part in the project cooperated well,” said Posco Chairman Kwon Oh-joon in a dedication ceremony. “We will try to maintain our status as a leading car steel sheet manufacturer in the global market. We promise that we will be a ‘total solutions provider’ for our clients.”

In the facility’s new furnace, the company has installed an evaporating cooling system that produces 23.4 tons of steam. Thirty percent of the steam is used for the heating system and the rest functions as an energy source for other factories, allowing the company to save 6 billion won ($5.67 million) in costs per year.

Instead of using traditional belt conveyors, the company decided to adopt a pallet transport system to move metal sheets, which is expected to reduce the number of defects and to improve handling and storage efficiencies.