Prices for iPhone 6 unveiled at last

Prices for iPhone 6 unveiled at last 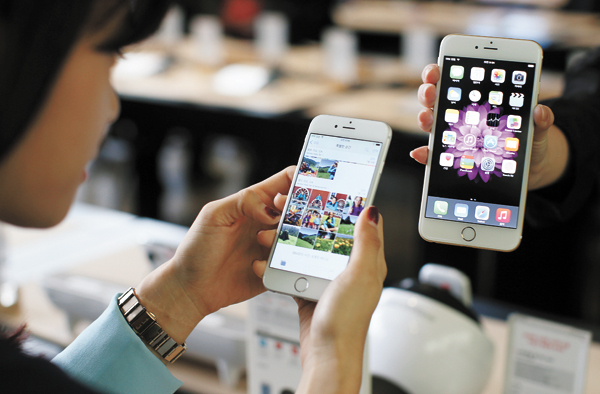 Customers check out the iPhone 6 and 6 Plus at KT’s launch event at Olleh Square in Gwanghwamun, central Seoul. KT, which has offered iPhones since the iPhone 3GS in 2009, will begin sending the new model to customers who preordered them. [NEWS1]

The No. 3 player, LG U+, is selling iPhones for the first time.

The three carriers - SK Telecom, KT and LG U+ - set identical release prices for the iPhone 6 and the larger iPhone 6 Plus, but actual costs to consumers will vary due to differing subsidies offered by the carriers. 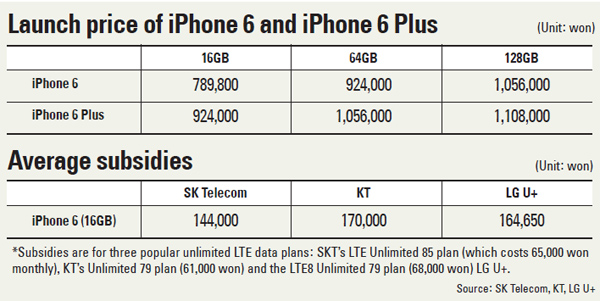 The subsidies offered by the trio of carriers range from 100,000 won to 255,300 won. The highest subsidies come from newcomer LG U+, offering 255,300 won if a customer chose the company’s most expensive monthly data plan, LTE Ultimate Unlimited 124.

That subsidy was narrowly followed by the second largest carrier KT’s 250,000 won for customers who signed onto to the KT Unlimited 129 plan. SKT, on the other hand, offered a more moderate 170,000 won subsidy on its LTE 100 plan.

The mobile carrier also launched its Zero Club earlier this month, a promotion in which consumers can purchase the latest smartphones at the lowest prices by receiving discounts on the condition that they return the new phone after 18 months.

Under the plan, the carrier is able to skirt a subsidy limit and provide 340,000 to 380,000 won in compensation in advance in return for accepting the conditional offer.

The latest Apple model will likely do well in Korea, partly due to the enactment of the Mobile Device Distribution Improvement Act.

The policy limits subsidies to 300,000 won, undercutting price competition by carriers. Before the law took effect, distributors of the three careers were keen to offer even more generous subsidies to win subscribers.

Hundreds of people awaited the launch of the iPhone 6 and 6 Plus from the early hours of yesterday morning.

LG U+ said that approximately 800 people gather for launch events held at a handful of stores across Seoul.

The carriers didn’t reveal the number of orders made on the first day, but market analysts expect the volume to be twice as much as the iPhone 5.

The number of preorders received by the three carriers exceeded 100,000.