CSAT scores will be recalculated

CSAT scores will be recalculated 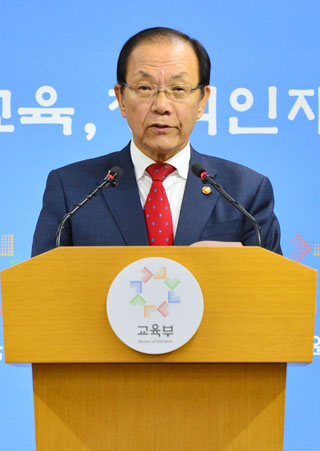 Education Minister Hwang Woo-yea talks about the CSAT recalculation at a press conference at the ministry’s building in Sejong. [NEWSIS]

Education authorities yesterday announced they have decided to change the results of this year’s college admissions results, admitting that a grading mistake was made in the world geography section of last November’s annual College Scholastic Aptitude Test (CSAT).

This is first time since the test was introduced in 1994 that the judiciary has determined that a CSAT question was erroneous - and college entrance results, which have already been finalized, will be altered because of it.

The Ministry of Education is also in talks to establish a special law that would assist those who failed to enter university because of the question. The plan could help them get accepted next year at the schools to which they applied.

The decision follows the Seoul High Court’s ruling on Oct. 16 that deemed the question vague.

In last year’s world geography test, the eighth question asked students to choose whether it was right or wrong that the European Union’s gross national product (GNP) is larger than that of the combined GNP of nations in the North American free trade agreement (Nafta). However, no year was specified in the question, which was worth three points.

The Korea Institute for Curriculum and Evaluation (KICE), a government organization that oversees the administration of the CSAT, said later that most geography textbooks state that the EU’s GNP is greater than Nafta’s. Statistics Korea says that the Nafta nations’ GNP has been larger than the EU’s since 2010.

A group of students sued KICE and the Education Ministry last year, but lost in a first trial in December 2013. Following the decision, KICE announced that it was not going to appeal the case before the Supreme Court, and its head Kim Seong-hun apologized for the inconvenience.

“The Ministry of Education supports KICE’s decision to admit the appellate ruling,” Education Minister Hwang Woo-yea said at a press conference yesterday. “From now on, our top priority will be taking proper measures to help the students who encountered problems due to the world geography question.”

The Education Ministry is planning to discuss details of the measures with schools and the Korean Council for University Education. The plan is expected to be completed before this year’s regular university application process begins on Dec. 19 to avoid confusion.

Those who benefit from the decision could possibly be admitted to their schools by March, along with next year’s freshmen.

According to the authority, 18,884 out of 37,684 examinees - slightly more than half - got the question wrong last year, and about 4,800 of those are expected to be boosted into higher grades on the exam now that a correct answer will be afforded to all test-takers in the recalculation.